Once a week, when Aki and I walk a route through downtown Juneau, the little dog transforms into a policewoman patrolling her beat. This morning, as sunlight brightens the clouds over Douglas Island, she insists on a full investigation of a patch of pavement on Chicken Ridge. It could be urine spread by a favorite dog friend, or scent left by the bear that raided a neighbor’s garbage. It might even be the aroma of popcorn crumbs scattered by one of the neighborhood’s raven or the faint musk of a passing deer. Is this town, the state’s capital, uniquely blessed to have so many wild animals within its urban core? Or do the little dog and I just have more time than other city dwellers to notice?

In pre-dawn light, it’s hard to distinguish the fisherman from the scattering of ruined wharf pilings that mark the mouth of Sheep Creek. On the opposite end of the creek delta two men in winter-weight overalls work a small gold dredge. Fish and gold, the two targets of Americans that moved to Alaska after Seward purchased the territory from Russia in 1867. Aki, who likes her fish fried and then drenched in soy sauce, isn’t on this beach for salmon or gold. She is here to inventory scents.

It’s thirty-eight degrees but a light channel breeze makes it feel colder. As long as she has new territory to survey, the cold doesn’t bother the little dog. But, when we complete a looping tour of the delta, she refuses to follow me as I walk back toward the channel marker. She knows that no animals, wild or domestic, have marked the path since she trod on it. I walk on, wanting a photograph of the first sun strike on the creek waters.

The gold dredgers have just pulled away in their pickup and the fisherman is packing up. Chilling in the wind, I wonder why I remain on this grey, cold place enticed only by the yellow light striking a cloud over Salisbury Point. 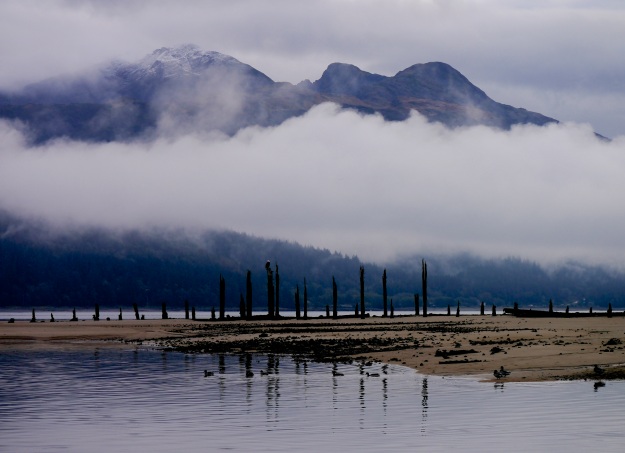 Three bald eagles fly over the little dog and I as we walk down Sandy Beach. Another one perches on the root of a large driftwood log as the closest, high in a spruce tree, scolds the other four. Across the deep cove formed by a mine tunnel collapse, a fifth eagle watches several mallard families dabble in the water. When the ducks swim past the eagle, it flies low over them and then out, over the channel. Other than the scolding spruce tree eagle, only two belted kingfishers show attitude. They twist and turn around each other over the ducks and eagles like fighter planes above London during the Battle of Britain. Instead of bullets, the kingfishers hurl angry-sounding curses at each other. They drop for a second, over my little dog’s head and I am thankful that God gave such fierce hearts to little dudes rather than eagles with two-meter wing spans. 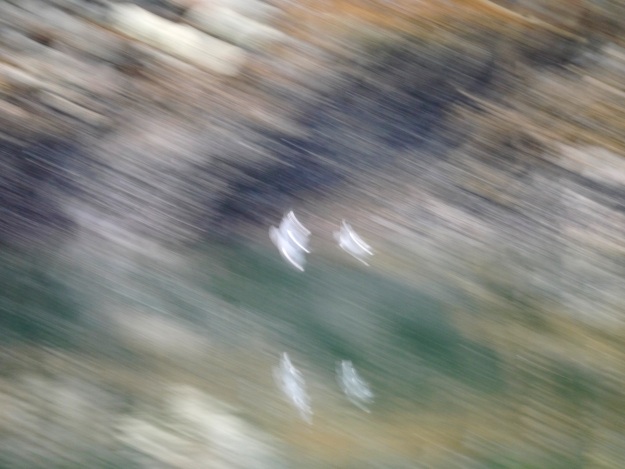 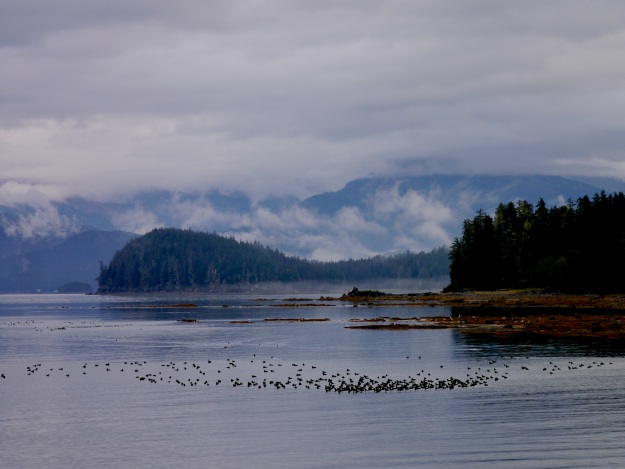 Last week, spider webs decorated most of the mountain hemlocks in this muskeg meadow. Today, the webs are gone. The little dog and I move down to the cove formed by Outer Point and spot a large raft of mallard ducks bumping up against the shore. An even larger number of surf scoters have formed a long, thick line on the other side of the Shaman Island spit.

When not being chased off by hunters, ducks and scoters winter in these protected waters. They spend their summers feeding in the rich seas along Southeast Island’s coast. A recent storm must have convinced them to return to our protected bays. 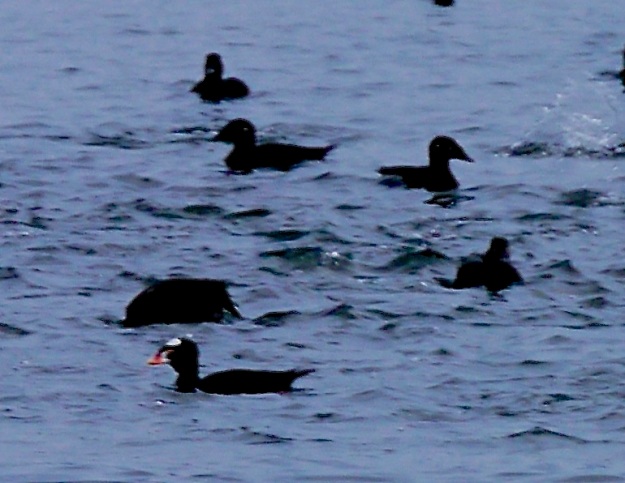 Aki is more interested in the beach sparrows and one bossy squirrel than the waterfowl. Too bad for her. Scoters, who sound like the Three Stooges in full retreat, act like members of a well-trained synchronized swim team. While I watch, they transform the thick line I first spotted into an elongated oval and parade past until reaching a ball of baitfish. Then, the birds in the forward section dive in unison, followed by the group behind them. The first to dive pop up at the back of the raft. Each subsequent line snaps into the water. In minutes the original leaders are back in the front of the oval. 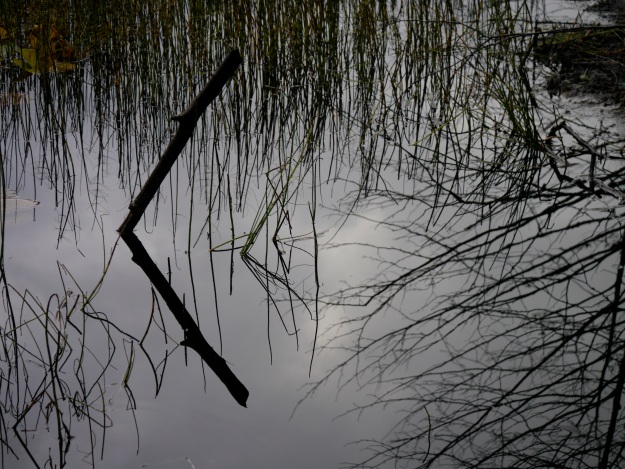 Why do the silly sounding and looking scoters fish in such an efficient and generous manner? What destroyed the spider webs? I could ask an expert or search for the answers online. But, I am not an educator or game manager so there is no reason to rinse out the magic.

The skies above this mountain meadow are as gray as Aki’s fur. But sunlight reaches a favored flank of Mount Jumbo. Little dog, why aren’t we so blessed? Aki pees—her typical response to a foolish question. Suddenly she is squinting, as the chunk of meadow we are passing through turns as bright as a California day. 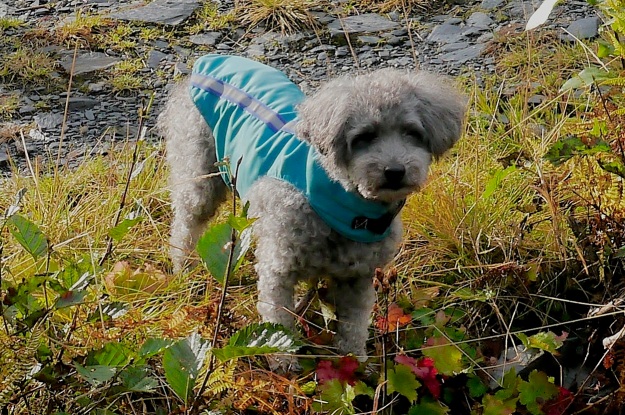 Rarity enhances value. For us rain forest dwellers, autumn sun is a rare commodity. I click away with camera, in danger of gushing about golden, glowing grasses when the sunlight blinks out and the meadow’s beauty fades to gray.

On the drive home, I stop to watch sunlight battle with broken clouds over the Douglas mountain ridge. The clouds win. As they each darken to a different shade, I am reminded that beauty can be found in the common as well as the rare.

The promise of sunshine on ice and yellowing trees induced me to bring Aki out to the west shore of Mendenhall Lake. By the time we arrive, the sun is ghosting behind a thickening cloudbank. But clouds don’t obscure the glacier or the sharp peaks that poke through the river of ice. They frame the beauty of cottonwood and willows that line the lakeshore.

Other rain forest dwellers are here, all apparently giddily from lack of rain gear. We can hear their happy noise until it is masked by the booms from the Sunday morning service of the church of powder and shell. My little dog freezes each time one the parishioners fires a high-powered rifle. When they stop shooting so they can safely check their targets, we can hear the yelling of children at play in an impromptu day care. I find myself channeling an old bachelor uncle and lead Aki into the woods where the ground moss softens the noise.

Sealed up in high-tech rain gear, I lead Aki up Basin Road and overt the wooden trestle bridge that connects town with the Gold Creek valley. Tough little dog, Aki pulls ahead, an occasional body shake her sole acknowledgement of today’s storm. Ahead, four tough tourists walk up the road, their only defense against the rain are the whisper-thin ponchos they bought at a tee-shirt shop on South Franklin Street. One wears shorts and flip-flop sandals. Not one has a hat. Standing across the valley from a swollen waterfall, they discuss whether to press on or return to town. Normally, I’d encourage them to take the Flume Trail loop back to town but it’s only 45 degrees and a suddenly intense rain shower is defeating their cheap ponchos. If they give in to the storm, I’ll have to make sure that they recognize the initial symptoms of hypothermia. Wise, as well as tough, the tourist turn back to town.

Aki and I are back on the glacial moraine. It’s early in the day—too early for wind to raise a ruffle on the Dredge Lakes. It’s also too early for other dog walkers to appear. On our last visit my little dog discouraged a black bear that must have been attracted by the herring scent floating off my coat. But since then I’ve washed the coat and we are on a different section of the moraine. 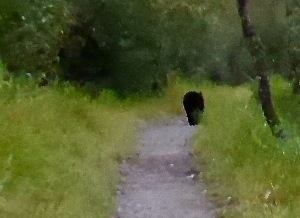 We drop off a raised trail to where we have an unobstructed view of Moose Lake. A white strip of fog separates lakeside cottonwoods in full fall yellow from a spruce-green mountainside. Reflected in the lake, the fog underlines the cottonwood trees. I take several photos of the scene and look at them on the camera view screen as we return to the trail. “This is why we are here, little dog,” I tell Aki and then say, “Uh-oh.” Aki, who apparently knows the meaning of “Uh-oh,” goes on alert and looks down the trail where a 100-pound-plus-pound black bear has just stopped walking toward us. With fluffy, shinny back fur and round belly, he has the just-moussed look of a bear full of fish fat. When Aki growls, it slowly turns around and trots away from us down the trail. “That’s it, little dog, I tell the ten-pound poodle mix, we are not coming back to the moraine until hibernation time.” 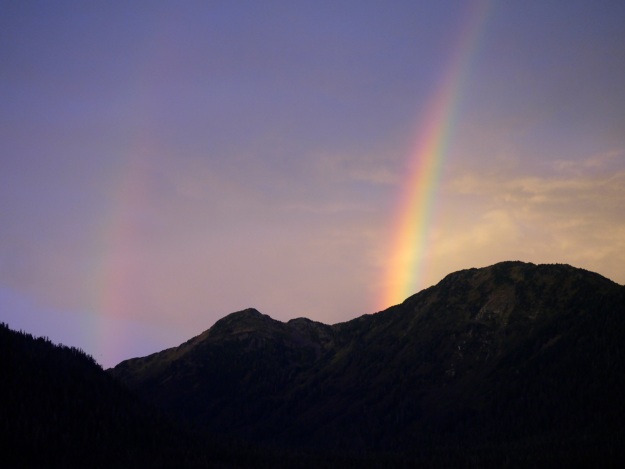 Even as we enter gray autumn, Nature can splash Chicken Ridge briefly with sun. It usually happens when night gives way to day. This morning we had the added bonus of a double rainbow that arced above Gastineau Channel from Douglas Island to Mt. Juneau. It faded as the wind rose and rain began to spit. With the windshield wipers engaged, Aki and drive out to North Douglas to get a feel for the coming storm.

We walk along a boardwalk trail protecting a fragile muskeg meadow from foot strikes. This is not a popular dog trail so Aki has to make do with the scent markings of wild things. When not sniffing, the little dog walks at my heals, stopping when I stoop to test the ripeness of lingon berries. 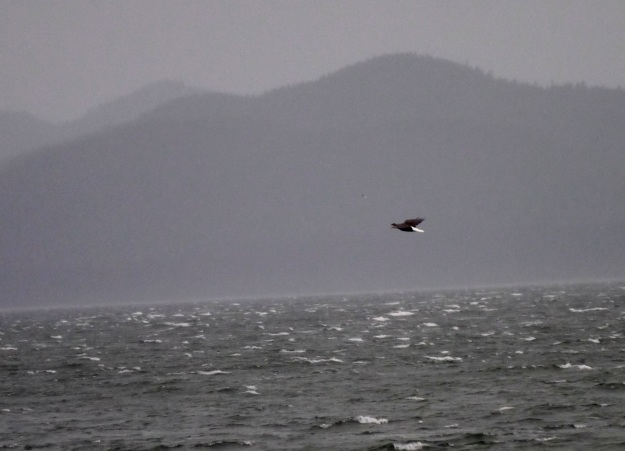 The trail leads to a beach where small surf breaks on the rocky shore. Light fog softens the profile of Admiralty Island but we can clearly see an adult bald eagle trying to fish. It fights for hovering position over a fish and then flies over to a beachside spruce with nothing in its talons. If the wind rises any more, we will have to hunker down. 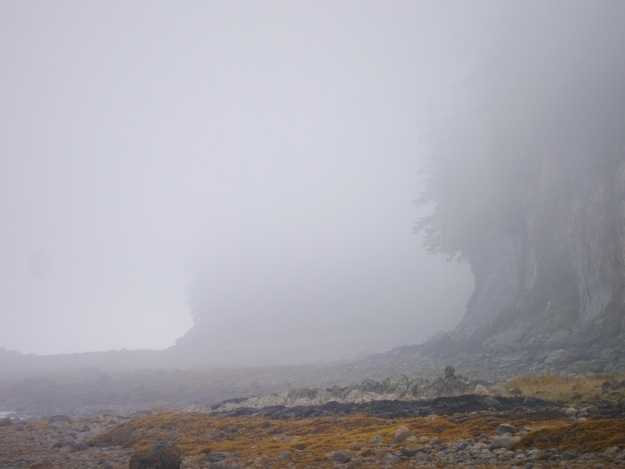 I came for the fog but am stopped in my tracks by spider webs. Arachnids have cast their sky nets over many of the mountain hemlock and shore pine on this muskeg meadow. A necklace of translucent fog pearls decorates the trunk of a hemlock. Aki attempts to move me along to the beach with a stare. We can both hear gulls bickering, a malcontent eagle and the stage whispers of sea lions. I yield, as she knew I would and we descend into the gray as a foghorn announces the Norwegian Jewel delivering 3500 more customers for the jewelry stores and tee-shirt shops on South Franklin. None will see the spider’s fine work.