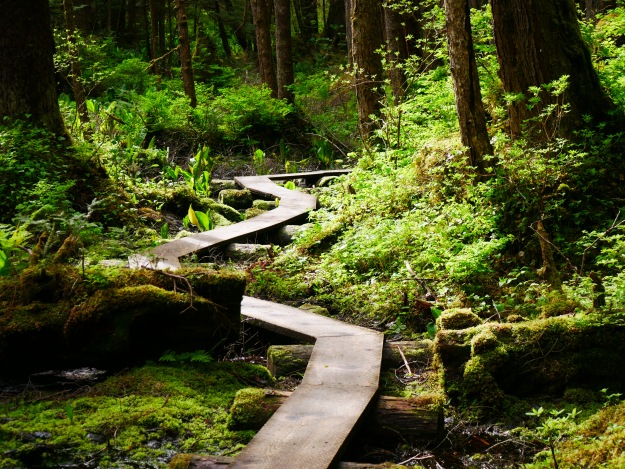 This week’s storm is at a volatile stage. Wind gusts tear up and them coalesce the cloud cover.  Wind driven rain strikes Aki and I at the start of the Outer Point Trail. A few hundred meters in, shafts of sunshine hit the forest floor. Leaks in the damns of overworked beavers pour onto the trail where it rounds their pond. Good thing for them that the storm is weakening. Good thing, too, for Aki and I. The rain-swollen pond now covers part of the trail with boot-high water. If the rain doesn’t slacken we won’t be able to use one of our favorite trails. 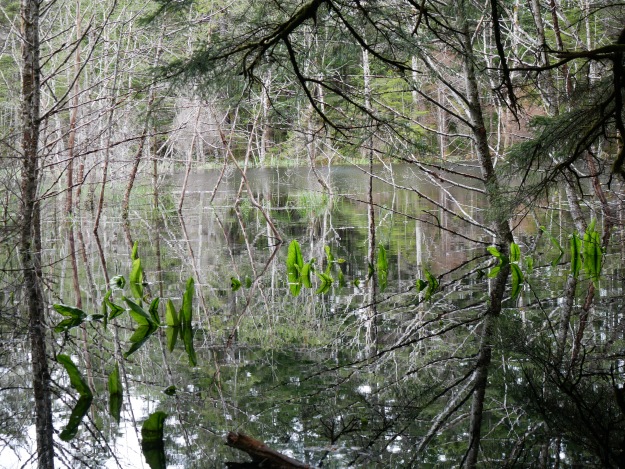 The tide is out when we reach the beach but the causeway between Shaman Island and us is still underwater.  At the water’s edge an immature bald eagle rests on a rock. Two mature eagles bicker at each other from their perches on the island. The immature bird is watching a small raft of ducks fly back and forth over the sunken causeway.

After the immature bird flies away, I walk toward it’s rock. Aki is slow to follow. I think of a recent BBC post of a bald eagle lifting a fox in the air.  The eagle’s talons dug into a rabbit the fox was carrying and not the fox itself. But the blow snapped about the fox’s body as if it were a rag doll. Looking at my reluctant little poodle-mix, I wonder it she accesses our computer while her humans sleep. (http://www.bbc.com/news/av/world-us-canada-44250472/fox-catches-rabbit-then-eagle-swoops-in)

Sunshine floods Stephen’s Channel between Shaman and Admiralty Islands even as the rain falls. The resulting rainbow forms a low, multicolored arc over the water. I remember how, according to the Bible, God filled the sky over Noah and his family with a rainbow to commemorate His promise to never again allow the total flooding of the earth. I think about our weatherman’s promise of an end to the rain by mid-week. I wonder if the beavers will be upset or relieved when the rains stop.