Aki is in a foul mood. She growls at people walking on the other side of the street and sometimes at things I cannot see. Maybe she sees the ghosts of the old miners that once lived in the old Craftsman houses we pass on this walk through downtown Juneau. When I stop to photograph an eagle roosting in a nearby alder the little dog tugs her leash just as I click the shutter. Now I am in a bad mood. On the crooked steps that lead from Gastineau Ave. to tidewater, we hear a song sparrow’s clear, sweet song. I look for it in the step-side brush but find it just in front of me on the roof ridge of a shack. For once Aki does not tug as I click the shutter. The resulting photo shows a bird on the verge of a bad mood. 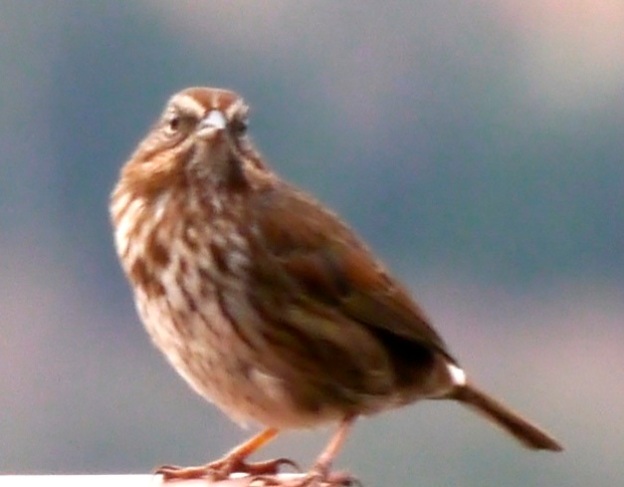 The calendar claims this is the first day of spring. The marshlands along Fish Creek seem to confirm it. This is rare for Alaska, where late-March is a usually a great time for snow sports. Like me, Aki seems to enjoy the warmth and other spring signs. There’s the busy chit-chit sound of nest building songbirds but I can’t spot them. Nor can I see the sapsucker worrying away at a hidden tree with its beak. Almost all the ducks in the marsh have collected in a small area along the creek, which is now swelling with incoming tidal waters. Mallards make up most of their numbers but I can make out the odd American wigeon among them. I think I also see a teal. Above the rest a quartet of killdeer fly. We don’t usually see those guys.

This morning, while cleaning up a garden plot, I felt like I was being watched. I was, by a cloud of at least twenty eagles and an escort of ravens. In seconds the cloud dispersed as eagles spread out over Downtown Juneau. Before they totally disappeared, one dived on another in an attempt to mate. Then they were gone. 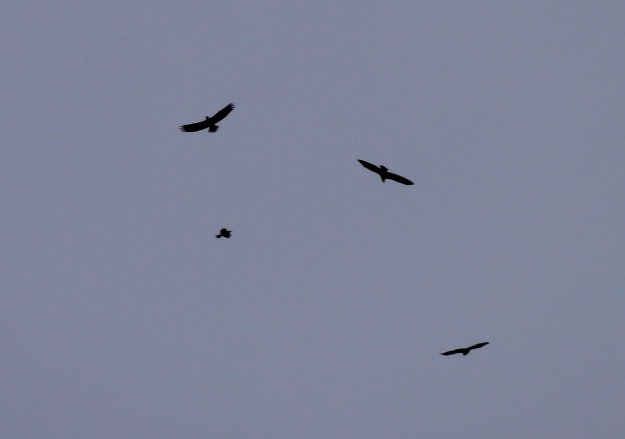 This afternoon, Aki and I don’t find any eagles along the shore of Mendenhall Lake. There’s just a huddle of mallards shouldering off the rain on a rocky point. My little dog ignores them but they stir and look our way until we break back into the woods. 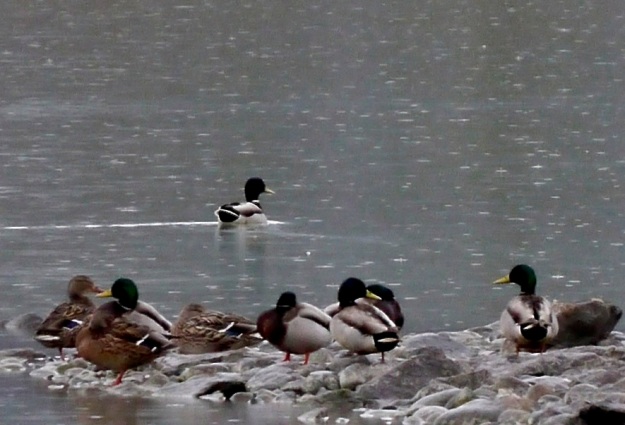 Aki is uneasy this morning. She throws on her brakes just before stepping onto the old Basin Road trestle bridge. Another dog passes us on to way to Perseverance Trail and my little dog trots after her. Aki halts after we cross the bridge. Hoping that she will change her mind again, I ignore her and search the slopes of Mt. Juneau for mountain goats. If there, they should be easy to spot in the strong sunlight illuminating the mountainside. I can’t find them. The snow that fell on the ridges last night must have driven them down toward the creek. Maybe they found some fresh greens in a place hidden from our view. 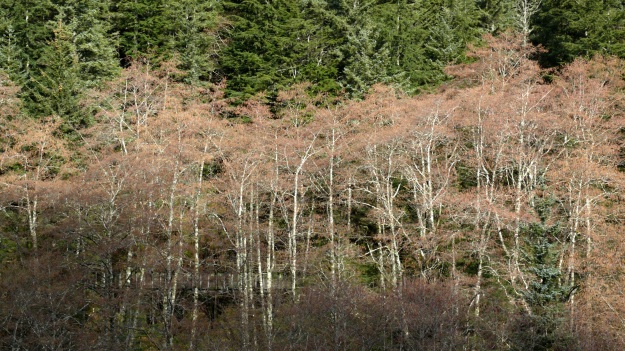 The little dog starts up the road after a few minutes but shows little interest in my plan to climb to the Perseverance overlook. She must smell scents left by a passing bear. In a normally year, I’d attribute her shyness to something else but since I can spot other signs of spring, it would not be surprising to find a bear emerging from winter hibernation. Already the alder limbs are bent down with blossoms and fuzzy catkins decorate the willows. 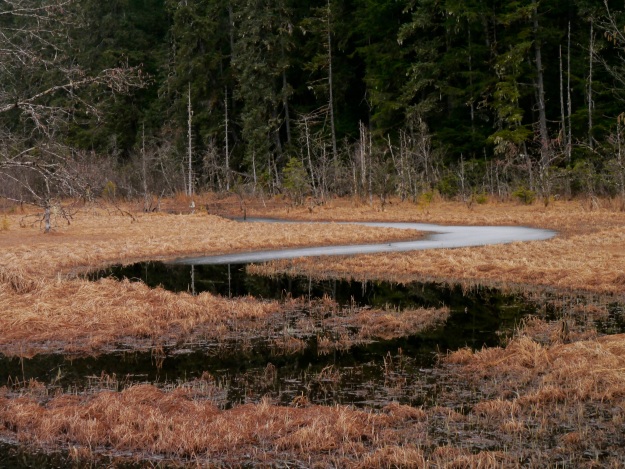 I bring Aki to the Eagle River woods hoping to see mountains, birds, and in the river maybe even seals. Today thanks to weather and the season, we see none of those things. Clouds occlude mountain views. Only a pair of bored ravens break the silence. The river meadows could be famine fields. Even the river mouth sandbars, exposed by a low tide, are empty. Normally I’d treasure the solitude and silence but today, I feel like the guy no one invited to the party.

This morning a family of mountain goats feed near the shoulder of Mt. Juneau. Aki tugs at her leash as I try to watch then through my telephoto lens. From other trips, I know that the goats start each day down the mountain in areas where fresh greens already think it is spring. The noise of people and dogs on the trail seem to drive them to the higher elevations. So I shouldn’t be surprised to find a clump of snow-white fur on the trail near a large patch of emerging ferns. It could be from a dog except it isn’t greasy like a northern bred’s at the end of winter. It doesn’t have that stale, doggy smell. It smells heather-like, maybe like a just-broken willow twig. 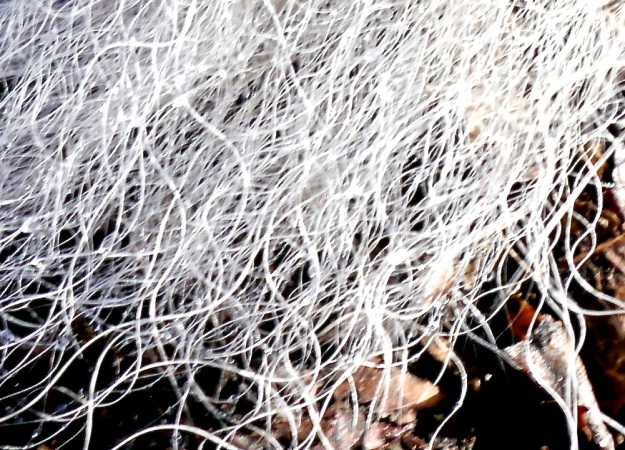 On our return trip down Basin Road we pass under two eagles in loose formation. I wonder if they are the pair that I watched mate yesterday from our upstairs’ window. Unlike the loose, play-like flight of today, they flew like predator and prey. One pursued the other who repeatedly escaped pursuit with abrupt turns. Finally they hooked up—literally. With talons locked, they formed a spinning sphere that that tumbled toward the state capitol building. In seconds they broke apart and climbed back into the sky. Seconds later they resumed the hunt. 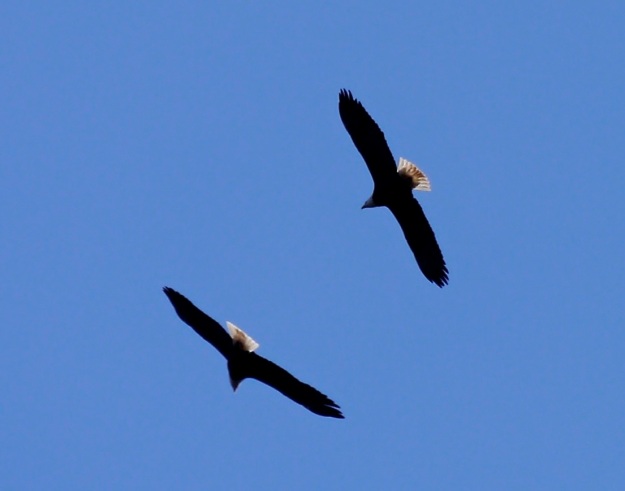 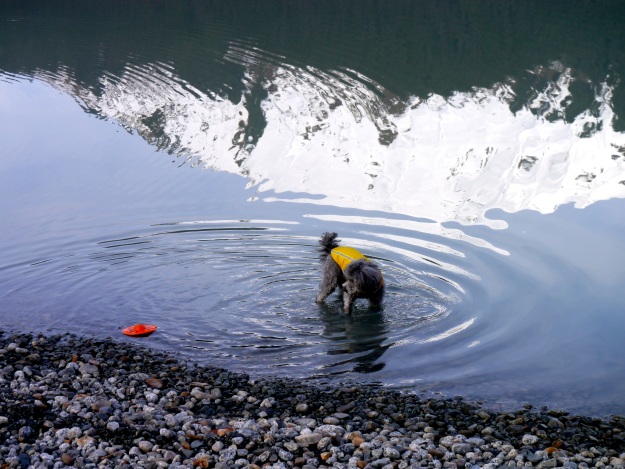 Aki and I are both obsessed today. She is all about her orange Frisbee, which she wouldn’t drop from her mouth if I waived meat under her nose. In spite of all the blue-sky-beauty of the glacier and its mountains, I’m fixated on a nuclear family of Mt. Goats that look down on us from a mountain ridge. I fiddle with camera setting to get a decent photo of the trio. Each effort fails. Before spotting the goats, I found lots of small beauty, all involving a reflection in open lake water. In my favorite, a sliver of water between shore and ice is sky blue marred by white clouds. Aki walked by the abstract beauty, concentrating only on her beloved Frisbee. 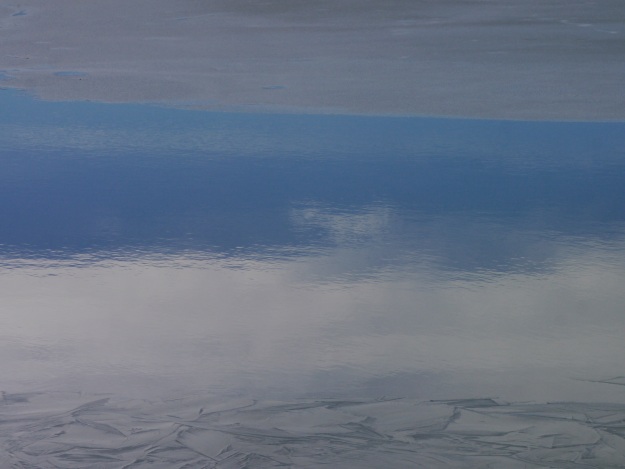