After riding for an hour through a tunnel of trees, I stop my bicycle where a landslide has opened up a view across the Kettle River Canyon. Even though its more than ninety degrees, I stand in the sun so I can see the blue sky punctured from below by firs and spruce trees. In the 1920’s the passengers of the Kettle Valley Railroad might have looked up briefly from their books or newspapers to catch a flash of this blue before the trees closed in again.

While sweating I think this would be the perfect place to watch a golden eagle ride thermal currents. Then a large, brown raptor glides between two spruce trees. A second, identical bird follows close behind. They are hawks switch backing back and forth across my view, like hikers climbing a steep mountain. I move on when the hawks are just brown spots in the azure sky.

This is day two of my ride from Rock Creek to Penticton, British Columbia on the Kettle Valley Trail. I have been on my bike for four hours and won’t reach today’s home at Idabel Lake for another three. Memory of the hawks’ sudden appearance distracts me from the heat and the indifferent trail conditions. I think, also, of the two loons that sang a shrill duet as they swam toward each other on Arlington Lake. I will see more of these most Canadian birds on other lakes along he trail. But they will be concentrating on fishing with no time for love songs.

Before spotting the Arlington Lake loons, I watched a Canadian goose hen lead her four goslings through a small set of rapids on the Kettle River. The young ones make up for their bland, monochrome coverings with cuteness. By fall time they will display the chestnut and white pattern of the adult goose. Canadian geese have become as common and unwelcome as pigeons in much of the United States but I still admire their markings and the way they protect their young.

Brochures describing the KVR promise great views of mountains and rivers. They describe the gut tightening series of trestle bridges you must cross to reach to reach Penticton. They warn of possible run ins with black bears, moose or mountain lions. A mountain lion walked within a few feet of me the last time that I did a bike tour in British Columbia but the only evidence of one I will find on this ride is a pile of scat filled with rabbit hair. I’ll spot moose tracks but not the animal that left them. There will be no bears but three white tail deers will freeze on the trail as I slam on my brakes. Mostly my days will be full of birds and butterflies.

The weather will change drastically the morning I ride away from Idabel Lake. Rain and clouds will drive down the temperature into the low fifties. A constant headwind will force me to wear all my warm clothes. But on the last day, while I breakfast at Naramata, the sun will return and bring with it warmth, as if nature wanted me to leave the Okanagan country with a smile on my face. 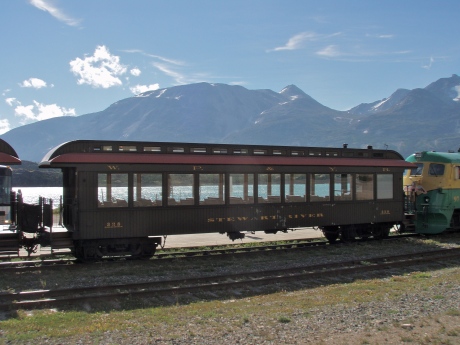 My biking partner and I are being taken to the alpine in one of the older White Pass Yukon rail carriages—the one set aside for hikers and German tourists. We could be riding the section of the Klondike Highway that climbs 12 miles from Skagway, Alaska to White Pass, sometimes at a 12 percent grade. Instead we relax, listening to a Yukon gold rush lesson from a disembodied voice generated several cars back as the train clunks over narrow gauge track. In its bowels rest Pedro and Side Meat, the weighed down touring bicycles we will ride 328 miles of British Columbia and the Yukon Territory to Haines, Alaska.  I should be reflecting on the challenges ahead — steep grades, old legs, bears, bad weather, trouble finding drinking water or even beer. Instead I gawk at beauty as we climb from coastal rainforest to a place of glacier scraped granite and alpine lakes. 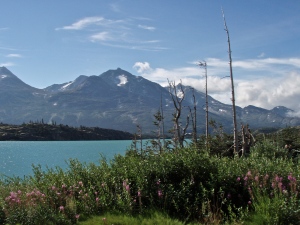 After claiming our touring bikes from the baggage car at Fraiser B.C. we roll up to Canadian customs where the agent asks the usual questions about money, guns, liquor, and tobacco. (He doesn’t care about fruit.) Since both bikes sport a set of large panniers affixed to front and back wheel racks, these are fair questions. When we answer in the negative, the agent wants to know how we are going to deal with bears or that wolf that recently chased a cyclist on our route. I want to tell him, “good luck and common sense,” but only smile to avoid a pannier search for bear spray.

With a waive of the custom agent’s hand we are released onto the Klondike Highway to pilot the heavily laden bikes into Carcross, YT.  Pedro, my 30 old Trek 520 soon settles down. We milk a tail wind for much needed help while climbing endless steep bumps that make hard work out of the descent from White Pass into Carcross. It’s hot for the mountains and sunny. We are always thirsty. The sun and deep blue sky bring out the beauty of the landscape—at first a broad flat valley of granite and shallow lakes boxed in by steep peaks, then walls of trembling poplar leaves until we reach the long blue waters of Tutshi Lake. For the rest of the day its all light brown scree slopes plunging into lake waters.

We camp night one at Carcross, hauling water from the gas station/cafe/store which also provides us beer and an excellent meatloaf dinner. We eat while watching the Toronto Bluejays game on TV. Outside the sun sparkles on Nares and Bennett Lake and the railroad trestle separating the two.  We we are too tired and thirsty to mind missing the show. Not normally a big beer drinker, the day’s dry heat, the sun, the exertion make me mad for brew.

Day two we break camp and ride into Whitehorse, receiving an unexpected blessing at the Emerald Lake overlook.  An Anglican priest, stopping on his way to his mission church in Carcross to admire the product of shafts of morning sunlight striking the milky green lake waters, offers a prayer after watching me slide through loose gravel in the parking area. It’ a fine blessing that washes away some of the concerns about aging bodies and bad drivers that had been bubbling up on the morning’s ride.

Our good weather continues in Whitehorse, where we stay two days, sharing the Robert Service Campground with Germans and other world travelers. I have a flat tire on the bike path running along the Yukon River. A nice rider stops and helps me patch it. After finding several deep cuts in it, he advises that I replace the failing tire with one I purchased that day at a local shop. I think of the blessing and recognize today’s minor miracles: that I thought to buy the tire, that the shop had a quality touring one that fits Pedro’s outdated 27 inch wheels, that the helpful rider stopped by, that the homeless guy emerging from a riverbank nap didn’t manage to take my bike for a ride. Another miracle was the discovery of a rich patch of wild raspberries which yielded enough fruit to make memorable the next morning’s breakfast.

It’s 100 miles on the Alaska Highway from Whitehorse to Haines Junction, YT. We hope to cover 50 of it on day three of riding. Lack of good camping opportunities force us to pedal 70 miles to Cracker Creek where we cook Indian food on the center line of a redundant section of the highway before collapsing into sleep. We wouldn’t have made it that far if not for Irene, who served us hamburgers, french fries and a Canadian Beer at her restaurant along the the way.

On the short ride from Cracker Creek into Haines Junction. YT we run into a solo biker from Ottawa who wants to make sure we know the Village Bakery is still open. This is good news indeed for which we thank him before he proceeds to announce all the good bakeries he had exploited on his two week ride through the Northland.  After visiting a local farmer’s market in Haines Junction we suck down steamed but ungarnished Swiss Chard in our motel room and prepare for the 148 miles of mountain road we must ride to the ferry terminal in Haines, Alaska.

Facing a headwind and rain, we climb out of Haines Junction for 3.5 miles to where the road takes on a rolling personality, dropping only to rise a little higher as low clouds appear to chew on the surrounding mountain tops. This is our hometown weather so we push more on than 50 miles to the Million Dollar Falls Campground where, we were told earlier by another group of Juneau bikers, cold beer would be on offer. Those 18 were riding naked bikes behind support vehicles that haul their clothing, camping gear, and food. They delivered. The beer refreshed and the company’s kindness reaffirmed the power of our Emerald Lake blessing. 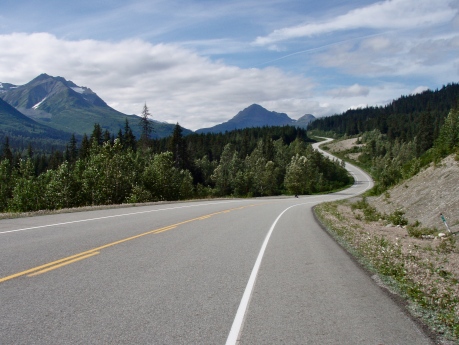 We leave Million Dollar Falls with the group of 18, who soon disappear into  fog covering the long incline of road leading toward Alaska. This becomes a special day as fog gives way to broken cloud conditions, sunshine illuminates retreating glaciers and broad flat river valleys full of clucking ptarmigan, nervous ground squirrels, golden eagles, swan pairs, and at least one grizzly bear sow and cub. We see the later fairly near the road on a treeless river plain. We stop. You have to, through if she thought we endangered her child, the mother bear could easily run us to ground. We are nothing but slow moving caribou to her. She is simply lovely with still wet golden brown fur glistening in the mountain sun, watching over a miniature version of her self in a darker brown coat.  We leave when she and her charge start moving towards our spot on the road.

My affection for Pedro always grows on days like this when it takes me to a top of the world place then lets me ride it down from it on steep descents to the familiar tidewater forests of home. 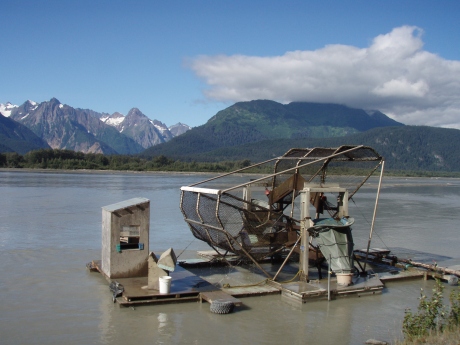