Today’s light rain has chased away everyone from the rainforest trail but Aki, my adult daughter and me. We find the forest green, its foliage still intact, yet to be wounded by hungry insects, deer, and bears. The broadleaf skunk cabbage plants are still spring supple. 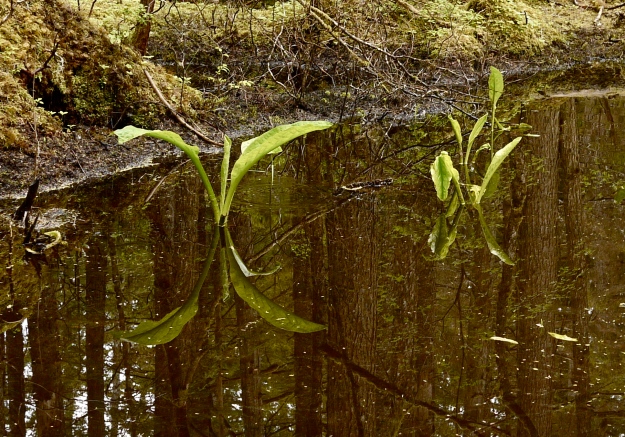 At the forest edge, Aki looks for someone to throw her frisbee so she can chase after it down the beach.She has to settle for the daughter skipping rocks over salt water. We walk out a spit of land that will disappear under an incoming tide to where good flat rocks are plentiful. The path is still two feet above water so I don’t worry about whether the tide is ebb or flood. Aki wades chest deep to better watch the rocks skip five, six, sometimes ten times before sinking. I watch too and remember how I watched her skip rocks on beaches here and in Ketchikan for more than 20 summers. Distracted, I don’t notice the tide cover our escape route until it maroons us. We have to wade through ankle deep water to reach dry land.

Two days of flat, grey light has diminished some of the joy of walking with Aki across this mountain meadow. Thoughts of a woman lost while hiking on a cross channel mountain doesn’t help. Not even the explosion of pink and magenta wildflowers (bog rosemary and dwarf rhododendron) lifts my spirits for the muskeg meadow they grow in is in drought. Ponds, where the reflections of mountains and British buckbean flowers can be broken by skittering water bugs are now dry. I can walk anywhere without soaking my boots.

Aki takes advantage of the freedom to roam from dried pond to dried pond, then rolls on her back on the meadow. The look of bliss on her furry grey face lifts my mood.

We walk down to where the trail crosses a diminished Fish Creek and turn back to the car. As the creek noise fades, I start to hear thrush song and here and there a robin making the most out of this summer day. We pass an odd pair—one purple violet and a yellow skunk cabbage flower—standing side by side, but a discrete distance apart. They could be strangers waiting for a bus or new kids killing time before school orientation begins.

Boats on the water in Southeast Alaska can bring joy and frustration, sometimes on the same day. With unlimited sun and warm temperatures, we have joy today but Aki expresses frustration at the time it is taking us to get to the picnic spot. She whines quietly and paces back and forth across the three foot width of the canoe as her paddlers fight a stiff headwind blowing off the Mendenhall Glacier. We land safely on an exfoliated granite point which reminds us of Sweden.

On this Memorial Day weekend we remember the beauty of Swedish archipelagos and our friends there. I remember family and friends who have passed, some in service to their country but most after just living good, useful lives. My now dead father would have love this place like he would have loved Aki and his never-met granddaughter. He would have laughed at me and and my fishing buddy when yesterday we yelled at a seal lion after it snatched away a 20 pound king salmon that my friend had hooked fairly.

We should remember our war dead this weekend but save time and energy for the deceased, like my father, who taught us to love.

Walking along the gentle woods that border Mendenhall River, I let myself day dream about a harlequin duck I watched yesterday as it floated on a back eddy of Gold Creek. It was a male with powder blue beak and bold slashes of slate blue and chestnut brown feathers on face and body. The duck could not hear me or my little dog over the noise of the swollen creek. So I stood, like a well hidden spy and watched the duck, so far away from the salt water where his kind feed. Was he trapped in this deep creek valley, unable to find a safe flight path out? Was he an angry teenager runaway or a daredevil taking a break from a dangerous whitewater descent? I wanted to wait for the duck’s next move until Aki showed impatient with every muscle of her 9 pound body.

This morning an alert Aki patrols ahead then strikes a guard dog pose next to a trailside clump of devil’s club. Each branch of the thorny plant holds a chalice of spring-green leaves too porous to capture the morning sun. 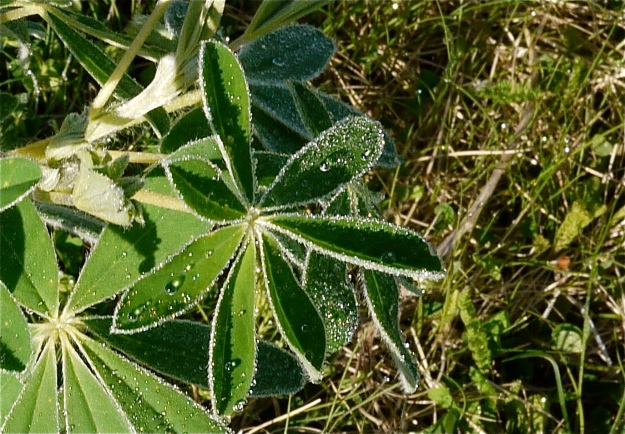 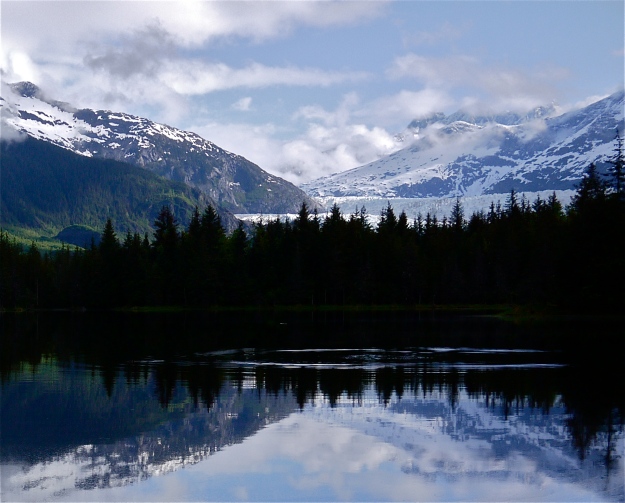 It’s good to be back in Alaska, reunited with Aki after a trip to Washington D.C. and the UK. Taking advantage of jet lag, I take the little dog on an early morning walk over the moraine to the troll woods. It rained most of the night but now sun enriches the green of newly unfurled poplar leaves, which perfume the air with their balsam. 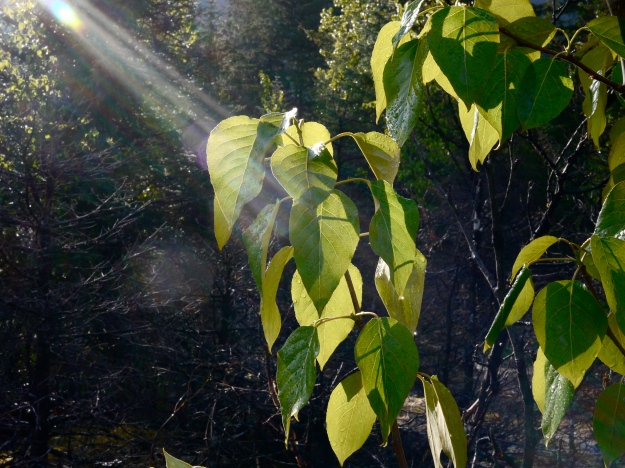 We are here before the daily startup of Juneau’s industrial tourism machines so no helicopters fly. No buses roar along the edge of the moraine. Only thrush song brakes the silence until reach a lake owned by two beavers. Aki, who fell through the ice covering this lake during an ill advised attempt to visit them one spring, whines as she watches a beaver approach. The beaver spots her and then slowly swims toward the little dog. I watch for several minutes as the beaver swims to within 40 feet, slaps the water with its tail, then continues its approach. It tail slaps the water again when much closer and then disappears.

Barbican Tube Station (Thunderstorm)On the way back to the car I think about our visit to London, a place yet undiscovered by beavers, where we rarely heard the local language spoken on its streets. While walking from the Seven Dials to Tottenham Court Road tube station, we heard stories told in French, jokes in Italian, and children chastised in Russian. German bounced off the tube station tiles to mix with Swedish and Spanish. Back in Stratford, where we stayed, we only heard when the birth languages of its immigrant population. Pedestrians kept to the right of oncoming traffic like Europeans, not left like Britons. Where, I wondered we’re the English. We found them in Hastings, where words on sandwich boards advertised Devon cream teas or fish chips, and tourist questions were answered in the Queen’s English.

We have sun today in Juneau and warm temperatures but also wind. A sirocco blew allow our plant starts out of the greenhouse and drives me into sheltered places. This afternoon, Aki and I walk through the trees of Treadwell that grow over the ruins of the old mining town of the same name. The woods look different in sunshine, almost bleak, compared to the moist lush greenness of rainy days. Now it is a place where drama comes in the form of shadows thrown by bare trees and the intense yellow-green of skunk cabbage blossoms.

It’s low tide on the bordering beach so we’d have to cross a fair bit of fine sand to reach the water. Aki acts like passing over it would as hard as crossing the Lawrence’s Devil’s Anvil. I agree and follow her back into the woods.