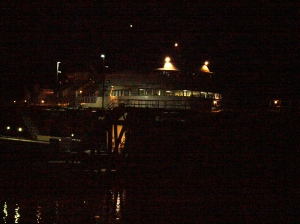 Our friends from Sitka could be home in 40 minutes if they took the plane. Instead they chose the Alaska Marine Highway MV Taku, which won’t reach Sitka for 16 hours.  We dropped then at the ferry terminal long before sunrise and then walked the edge of a wide crescent shaped beach in the dark.  Last night’s flood tide wiped the beach clean of snow so we are left with the choice of walking on dark sand or the snow brightened forest trail. We take the trail at first, thankful to have it to ourselves.

Later we drop onto the beach and listen to ducks complain near the surf line. Aki ignores then but I listen, trying to determine if they are exchanging information or expressions of frustration that we woke them up at this unnatural hour. The sea begins to carry reflective light—enough to allow us to spot a couple of seals cruising just off shore.

We can’t expect true daylight for hours yet but the morning dusk is winning it battle with the night and soon we can spot islands and low tide reefs as well as the horizon. Eagles stir in the growing light and move off in search of a morning meal.

For a brief moment we alone share this beach country with winter hardy gulls and two harlequin ducks.  Then, offshore the Le Conte ferry moves up Lynn Canal on a run to Haines, bright electric light pouring from its forward lounge. When it moves out of sight we have only the grayness of a stretching day spiced with white flakes of falling snow. 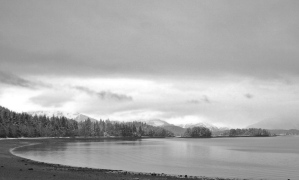 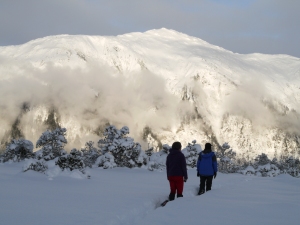 I’ve never known this meadow to carry such a snow load.  The recent storms spread a white layer three feet thick over the muskeg. Tight white runs of snow line the tops of the spindly bull pine branches giving them a respectable mass. We follow a trail once beat down by other snowshoers.  Snow from last night’s storm partially obscures it but there are three of us with snowshoes to pack it down again until it becomes a two deep canyon cutting across the meadow.

Aki sprints up and down the trough from me to the friends breaking trail and then back. While her people stand tall enough to see the mountain peaks of Gasteneau Channel dominating the compass points,  Aki, only sees snow and snowshoes. We expect little sunlight this close to the solstice but some manages to reach high up Mts. Juneau and Roberts before fog moves in to obscure it. For a short while we feast richly on lights and darks—-snow transformed trees beneath walls of white capped with grey clouds slashed by blue.

I won’t speculate on how Aki values her transit of the long two foot deep trench but its all beauty from where I am standing. There is also wonder when I find small assemblages of snow flakes dangling from a bull pine branch on spider web strands. They hang where no spider prey could venture now.  It makes me believe that the story of Wilbur and Charlotte could be true. 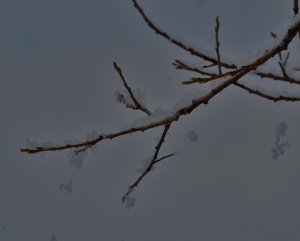 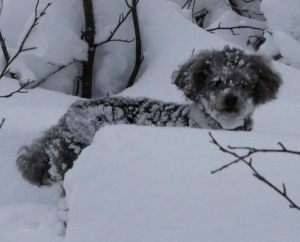 The first steps of the year in snowshoes always leave me discouraged.  It lasts until I find the rhythm and adjust the pace of travel.  Only snowshoes will work this morning. A series of nasty North Pacific lows have buried us in two feet of snow.  Strong winds pushed the stuff into the woods so nothing changes when we move from open moraine into the troll woods.  This first snow of the year has enough cohesion to drape white thick blankets over the trail railing.

I find the rhythm quicker than Aki who hangs back 20 feet and occasionally glances toward the car with a look of cautious hope on her face. Has she out grown the puppy joy that plunging head first into deep snow used to bring?  She did turn 5 last week. We have this place of beauty to ourselves so I move deeper into the woods. Eventually she takes station a foot behind the tail of my snowshoes.

No tracks mark the snow before we crest a low ridge and drop into the beaver flooded land. Then we see snowshoe hare tracks everywhere. Trail side alders hear heavy loads of snow. Those overcome by it lean low over the path so I have to duck under or turn back. At one of these barrier trees Aki bursts forward to roll wildly in the trail. Distracted I rise up too quickly and discharge a bucket of snow onto my head. Some manages to fall between my jacket and shirt collars. If Aki finds this funny she doesn’t show it on her poodle poker face.

My goal is the troll woods with its legion of moss transformed trees. We turn back before there when we come to the recent tracks of a wolf crossing the trail. Back at the car I pull golf ball sized snow balls from Aki while watching another snow storm move over the glacier. Its blue ice glows beneath a thickening layer of snow. 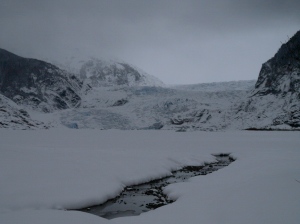 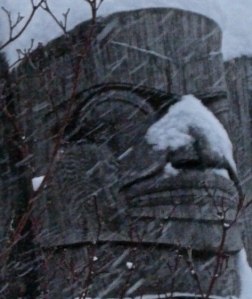 Totem poles almost never smile even when warmed and dried by summer sun.  Today the carved face that watches my morning descent off of Chicken Ridge has nothing to smile about for he bears a heavy burden of fresh snow with more on the way.   Still he offers me reassurance, not judgment.  Does he know that the red cedar giant stood worse winter storms a hundred times before being quartersawed for the ones who created him?  Pretty good carvers, those guys, to plant such a question in my mind. 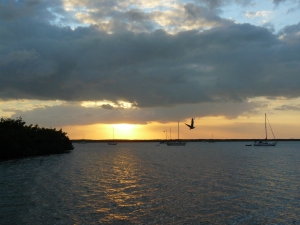 When visiting family in Central Montana I found that the best part of a sunset came after it dropped below the wheat stubbled field. Then, moving fast enough to keep ahead of the mosquitos I’d walk west on the ranch road as the sky bruised purple, red, apricot and yellow and wondered if the sun’s passage wounded the blue prairie sky.

Summer dusk in Montana dragged on long enough to discourage sleep. Not so in the Florida Keys where I just spent a week camping and bicycling. There the wise watch sunsets from their front porch or carry a flashlight. You can’t rely on a lingering dusk to help you find the trail home. I couldn’t rely on lessons learned on the prairie to measure sunsets in the Keys.

On the Keys the real beauty happens with the sun still a long necked beer bottle length above the Gulf of Mexico when an orange to apricot light colors the under sides of clouds but the sky still holds blue. Then pelicans, egrets and gulls reduced to black make small migrations across the sun. Just as it eases into the horizon the sun sends a reflection all the way to the beach.  After that it drops quietly into the sea and night takes charge.

One evening, while waiting for a sunset I tried to draw pelicans and cormorants drying themselves in the last heat of the day. The ever moving pelicans made poor models but the cormorants would form an iron cross with their wings for minutes at a time and the herons and egrets could be counted on for short periods of stillness as they stalked prey in the water.

After catching and swallowing a bait fish one great egret turned as if to watch me draw. In minutes he hopped up to share the dock with me, showing me first one profile than the other. He then struck a series of 30 second poses, some with neck stretched to full length and others with it folded into an impossible curve. His Great Blue Heron cousins in Alaska wouldn’t so much as share a large inlet with me. I know there is something wrong with this hunting bird actions but they still marveled.

The next morning I watched the sunrise over the Atlantic. The sky colored to apricot a half an hour before the sun appeared and then started paling to white. This stirred the birds who flew in long thin wedges across the bay and then over my head. Pelicans flew with beaks stretched out and egrets held their long necks in a “s” form so they looked like paper airplanes in the soft morning light.  All continued on over the roaring traffic on U.S. Route One and under fighter jets taking off from the naval air station. 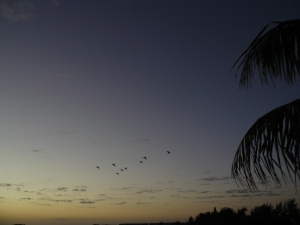 Later we visited a butterfly garden in Key West where a bronze blue heron waded in a Koi pool. Single drops of water fell from the heron’s beak into the pool to send out predictable ripples that rolled over the surface. I found myself wondering why a person living in the land of real fish, heron and egret would create something that could only remind one of true natural beauty. Then minutes went by with me simply watching the ripples distort the orange, red and black of the Koi fish gathered in the heron’s shadow. 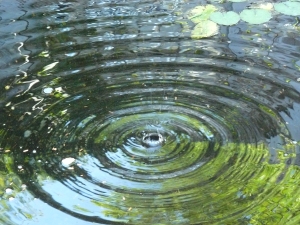 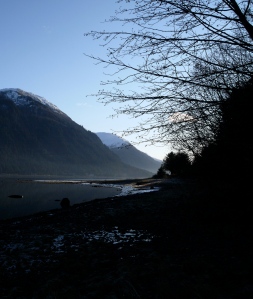 Today we get a taste of winter between autumn storms. No sun reaches us on the North side of Douglas Island even though it is after nine in the morning.  With the temperature in the 20’s Aki and I move rapidly through the woods for warmth.

The temperature drop gave forest moss a crunchy texture and formed a thick ice skim on the forest ponds. Those plants still sporting green look like overdressed fools in a hardware store. Their practical neighbors already wear their winter gear. 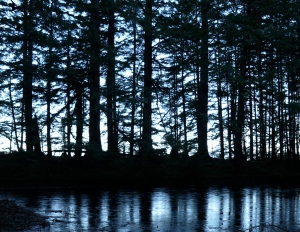 Nearing the beach we see Shaman Island through a screen of trees. The sun shines there but not on the beach.  Looking from this dark place over water to the light flooded island, I feel like a witness at the universe’s birth.  The low angle light of dawn reveals so much truth—-the grain in the island’s cliff, the number of each tree and bush. Clarity fades as the sun climbs and an Alaska Ferry moves past Shelter Island on its way to Haines. In between a lone sea lion breaks the surface of Lynn Canal. 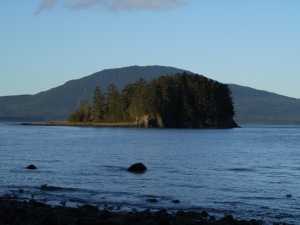 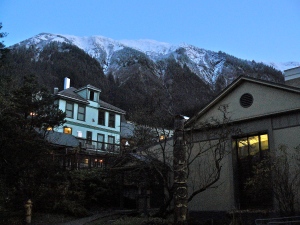 This morning a thin coating of ice covers all the walking surfaces on Chicken Ridge. The glazing on our small front deck makes retrieving the Juneau Empire a danger filled undertaking. Pre-dawn ice this time of year brings the promise of clear weather at least until the next North Pacific storm brings back the rain.

First ice brings beauty along with danger. Only a flat footed walk—more a slide really—can get me safely from Chicken Ridge to work. Shoe skating down 7th Street brings me to the Seward Street Stairs and a first view of Gasteneau Channel. This morning it wears a shawl of vampire fog, which can’t survive sunrise. That won’t be for a half an hour so there is still time for my idle neighbors  to put Beethoven’s Sixth on the stereo and watch the day build in richness with his music.