Yesterday, while Aki walked a Juneau Trail with a dog buddy, I strolled through the National Gallery in Washington D.C. Treating the main hallways as rain forest trails, I turned off them often to explore one of the rat-warren gallery’s rooms, like the one with the Turners or the hard to spot one with the Vermeer painting of the fop with a fuzzy red beret. The paintings’ drama and rich colors reminded me of Outer Point on the high contrast days of spring or a dying winter afternoon along Eagle River. 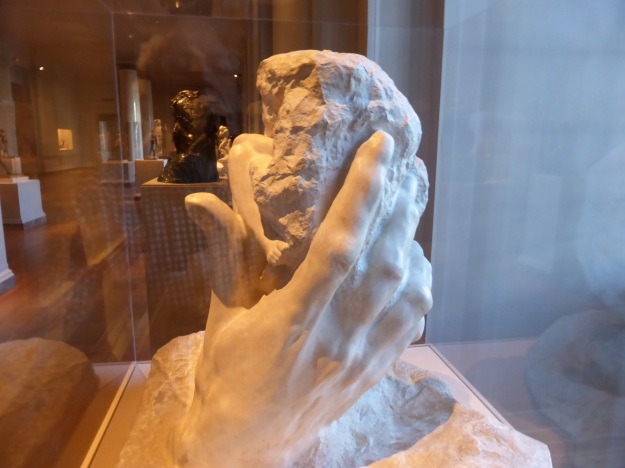 Remembering it from an earlier visit, I made an expedition into the basement where they keep the Degas ballerina sculptures and some plasters by Rodin. Even these reminded me of the rain forest with its complex shapes and falling leaves yielding to a strong wind. 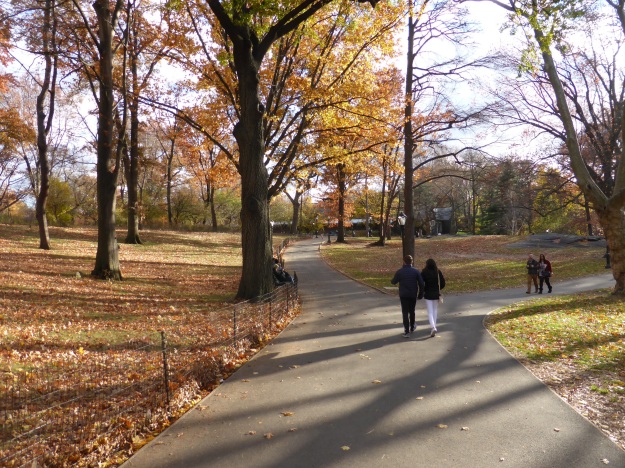 This afternoon, an hour after our return flight to Juneau landed, the little dog and I are alone on the Lower Fish Creek Trail. Instead of watchful guards we have an eagle that keeps us honest with its screams. I remember a walk I took a few days before when Aki’s other human and I crossed New York’s Central Park to reach the Metropolitan Museum of Art. Like it does over our glacial moraine, the sun broke through clouds to enrich the yellows and oranges leaves of trees along the trail. We passed a women turned away from the beauty to concentrate on her cell phone conversation while two men waited patiently for their leashed dog to evacuate its bowels. 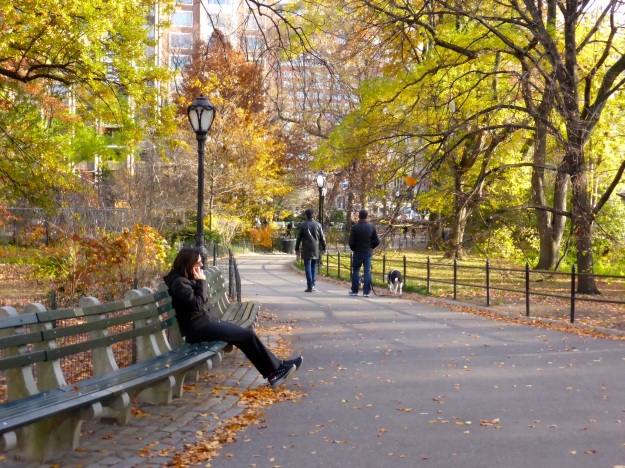 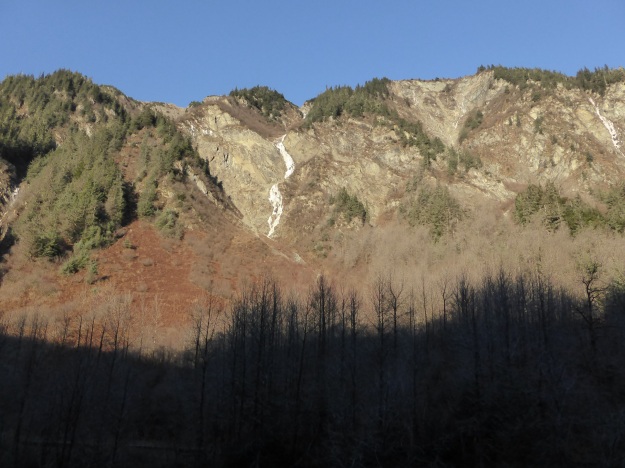 Through air cold enough to silence the waterfalls, Aki and I walk along Gold Creek. This time of year, none of today’s sunlight will reach the trail. It’s a day to appreciate ice. 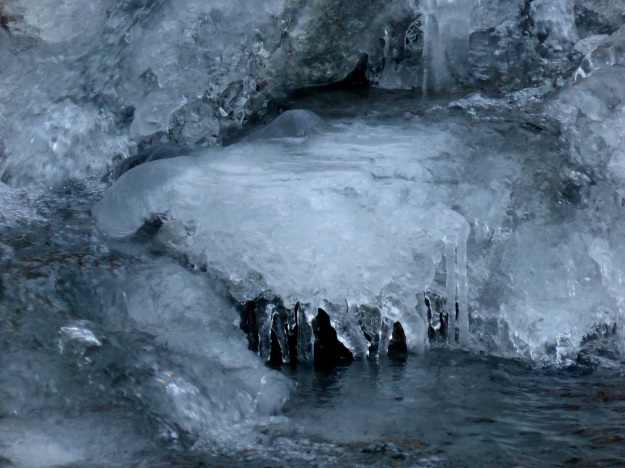 The little one doesn’t know or care at what temperature waterfalls freeze solid. The fills her brain with the history of all the places she has marked with scent. Aki loves this trail because of all the other dogs that mark it. Today she gets to flirt with several younger dogs. I stop often to enjoy ice sculptures that have formed in slow moving creeks and icicles hanging off moist valley walls. Even in the daylong dusk, they faintly glow. 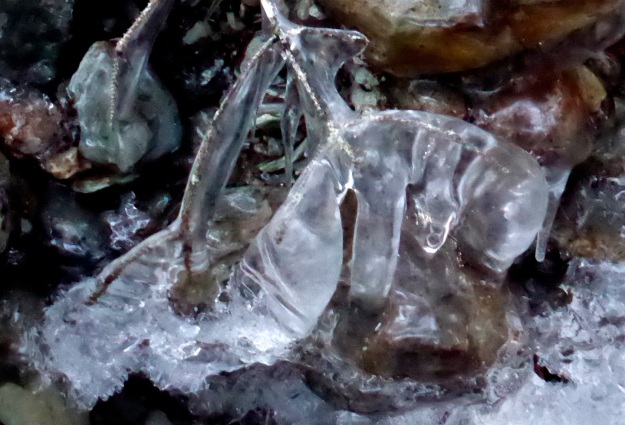 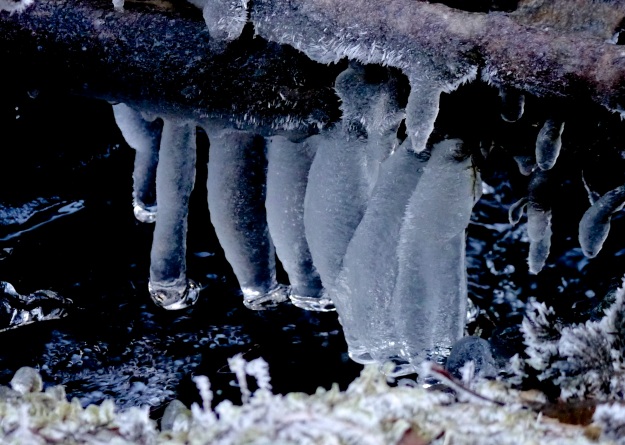 This is our first return to the Troll Woods since the bear incident. That ended with a curious black bear peering down at us from atop a spruce tree. Now, hopefully, the cold that has iced over the ponds and flooded the moraine trails has also driven the bears into hibernation. 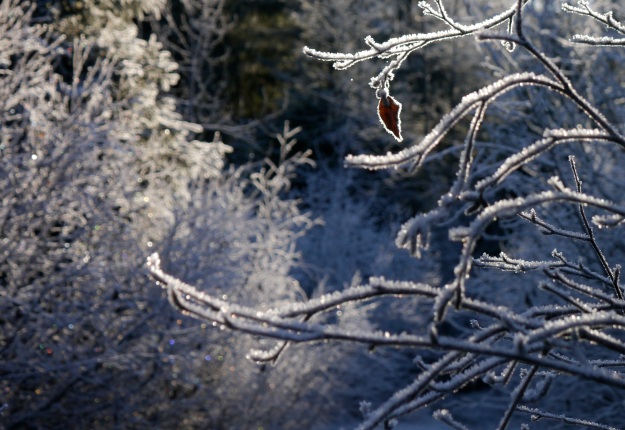 The rising sun can’t reach the first section we cross but its reflected power brightens the frost feathers from gray to a subtle white color. Ahead, Aki trots towards a sun-washed portion of the trail. But I want to linger in the calm dusk knowing that I won’t be able to appreciate its beauty after seeing the woods in full sun 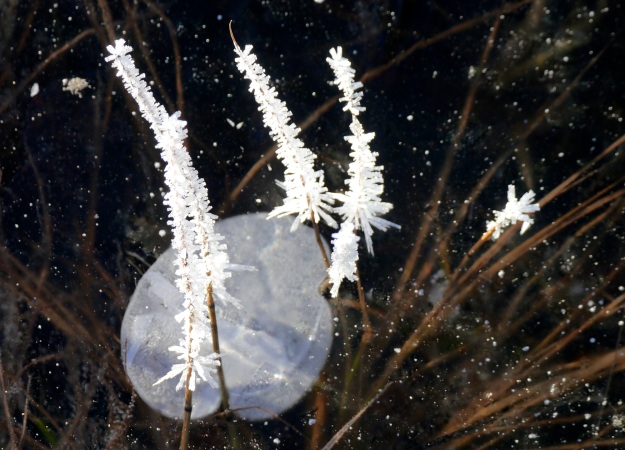 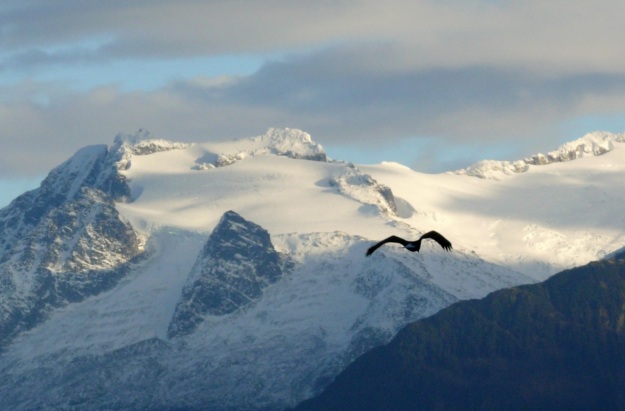 On these early winter mornings, the sun paints the rainforest its narrowest brush. Aki and I will spend most of this walk through it on ground where last night’s frost waits to melt when exposed to sunlight. On the border of meadow and forest, the frost may thicken for weeks on Labrador tea and lingonberry plants without challenge from the sun. 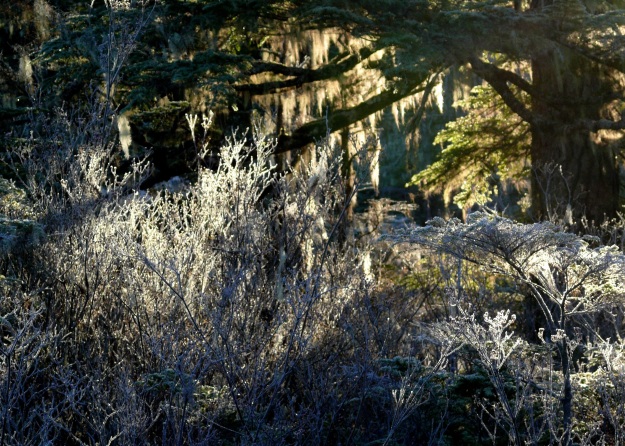 It’s low tide when we reach the beach where cold had edged tide pools with rime ice. Frost outlines the iodine-brown fronds of seaweed. I follow Aki to a sunny stretch of the beach and expect some warmth from the sun but it only makes me squint. 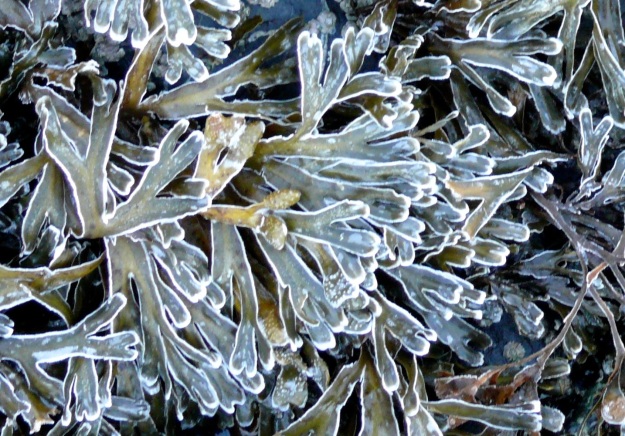 Back on the meadow behind the beach, I try Aki’s patience by waiting for sunlight to reach a patch of lingonberry brush. Somehow, three of the dark-red berries have survived the pickers and birds. The one I pluck tastes almost sweet and as complicated as a good red wine. Then, the sun glistens the scene. 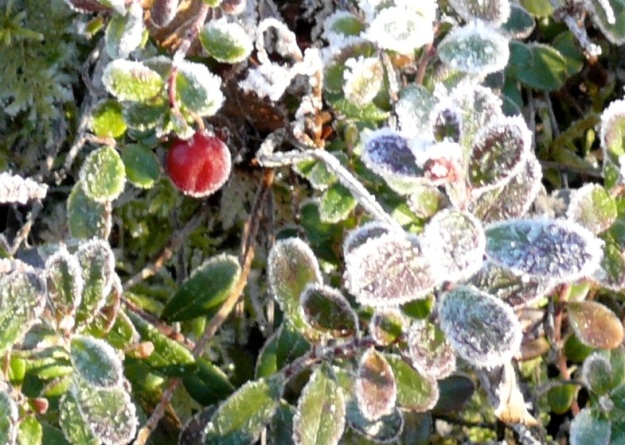 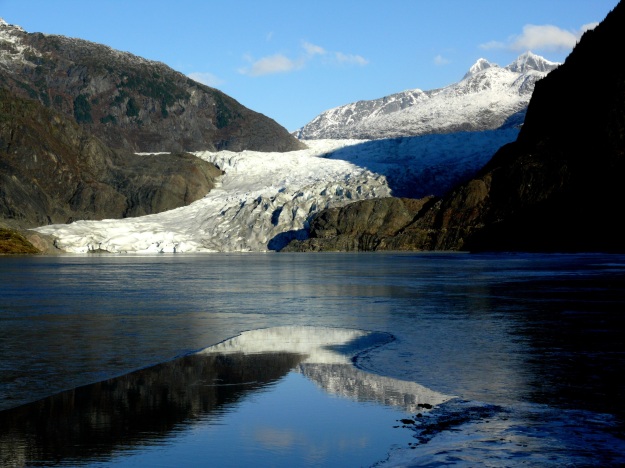 Today is Aki’s tenth birthday. We celebrate on the glacial moraine. A favorite trail is almost empty even though it’s sunny and frost feathers cover every stone, fallen leaf, and blade of grass. 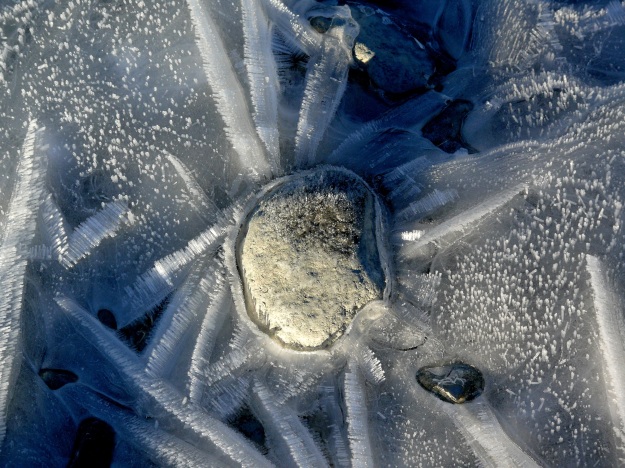 Wafer-thin ice covers Mendenhall Lake except where Steep Creek flows into it. At least four late-run sockeye salmon recently entered the stream. Three have taken up station on one end of the first beaver pond. A fourth is dead at the feet a bald eagle that is busy ripping off strips of salmon flesh with its orange beak. In seconds three other eagles land. The first bird chases off one but the other hangs about. Two magpies flutter around the feast but have to settle for scraps that have landed a safe distance from the eagles. Soon raven will push away the magpies and reach a détente with the bigger birds. 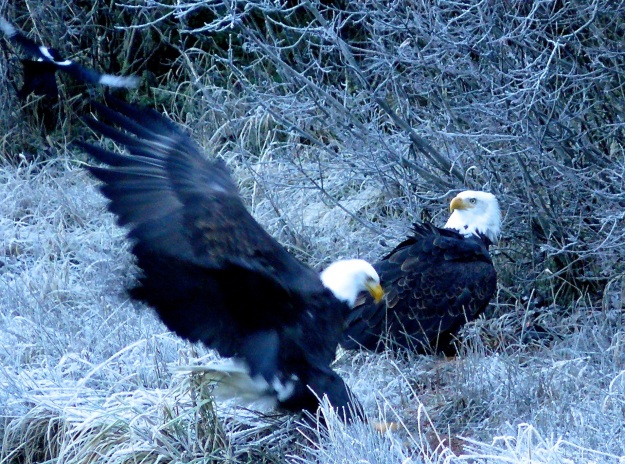 Aki, she ignores the bickering birds but not the scent of something she catches after we have moved away from the lake. At first oblivious, I trod on until I sense her absence. Turning, I see her standing stiff, noise wrinkling in caution. A line of what looks like wolf tracks lead from her to me. I back track and take an alternative way to the car with my little protector. 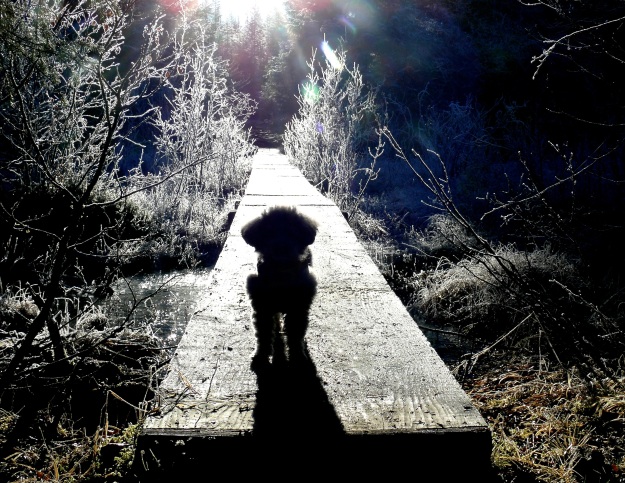 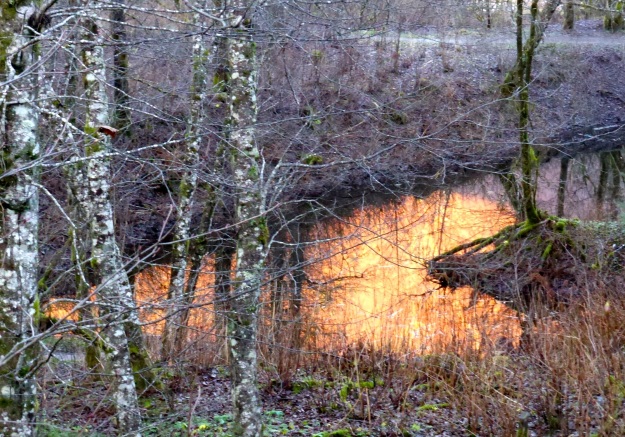 Aki and I race through Treadwell to reach the beach before Sheep Mountain loses the afternoon light. It’s our first walk since her other human and I flew down to Seattle on Friday. Since then I’ve been racing—to board our flight, rent a car, avoid rush hour traffic (failed effort), catch multiple ferries, and to make a wedding on time. On San Juan Island, we watched two people we first knew as children race into their adult lives. Then we raced back to Juneau. I’m tired of city traffic, crowds, and airports. Mainly, I am tired of racing. 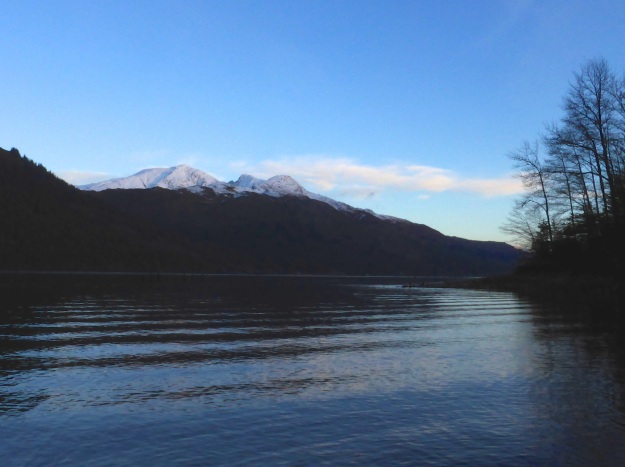 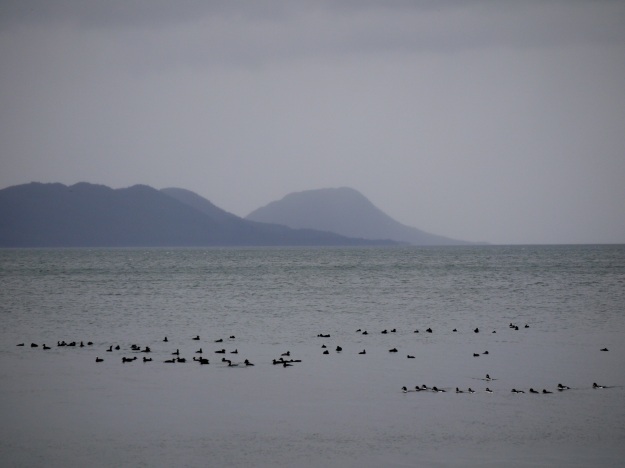 It’s been raining in Juneau since Election Day. The forecast calls for more of the same for the next week. Today, it is also windy. Aki and I enjoy a calm respite on the forest trail near Outer Point. We pass several new downed spruce, all toppled by recent storm winds. One floods the trail with resin perfume. The usual gang of gulls occupies the beach when we reach it. Just off shore surf scoters and harlequin ducks fish in a protective storm lee like they did yesterday, last week, last month. Nothing short of a shotgun blast can disturb them. Aki wants to return to the dark woods and then home. But I still linger in the calm. 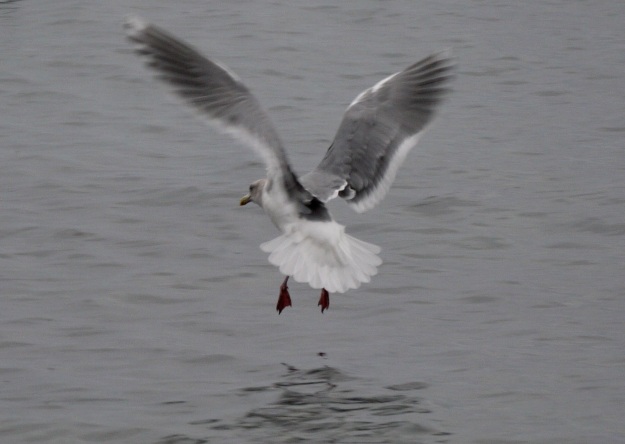 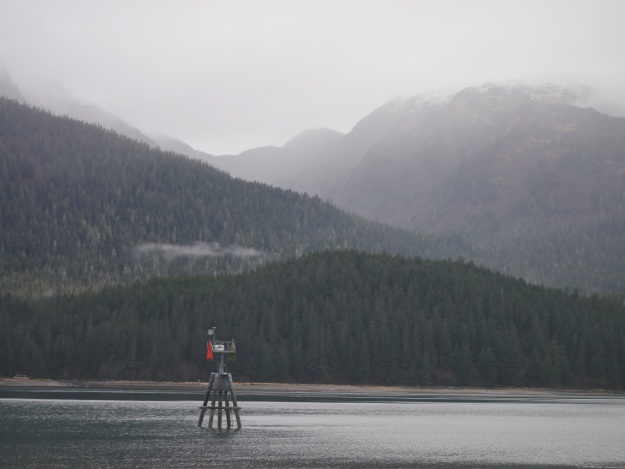 We are walking on a desert-like stretch of the Sheep Creek Delta where current and salt-water soakings make it almost impossible for anything to grow. Aki would rather be on the large beach that borders the old ore house. She loves to run across the sandy expanse and sniff for dog sign left above the high tide line. But there is bird action here. A great blue heron flies a low trajectory in front of us and lands a hundred meters away. Harlequin ducks, mallards, and goldeneyes paddle into the channel just far enough to ensure safety from charging Labrador retrievers. They don’t have to worry about Aki. She ignores waterfowl and refuses to swim. 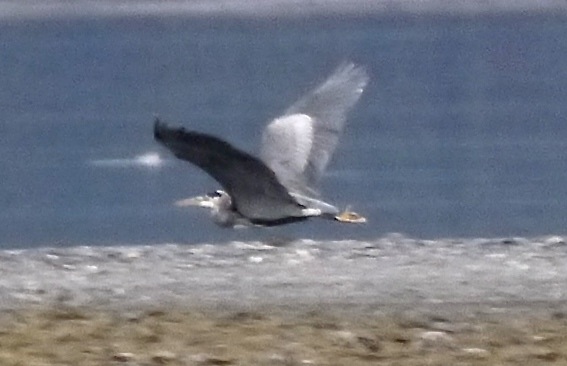 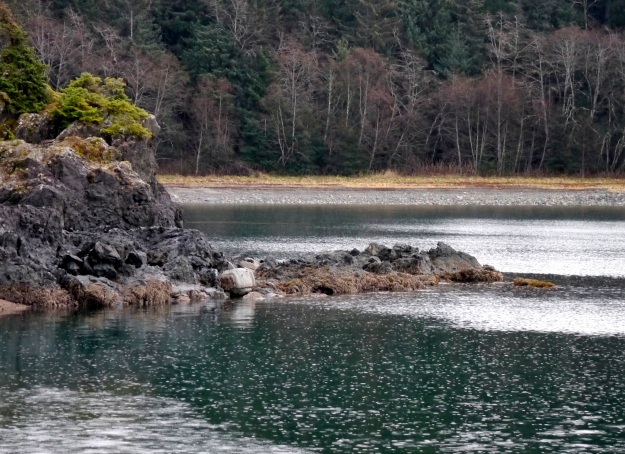 I’ve seen sea lions on these offshore rocks, but never people. The rocks form a spit that juts out from the island that will block our view of Lynn Canal during most of today’s hike. Goldeneyes, mergansers and other ducks usually feed in the channel between the mainland where Aki and I walk. Here, we have seen harbor seals, eagles, and of course, sea lions. But today only raindrops touch the water.

The trail takes us along beach tide lines and across a series of headlands until we drop down onto a pocket cove. Now we can actually see across the canal to where the Chilkat Mountains form a fuzzy line of bumps. The little dog and I take seats on top of a rocky point and let rain shower us. The two gulls break the silence by bickering over something floating in the water. It looks like driftwood with a blood-red gash. 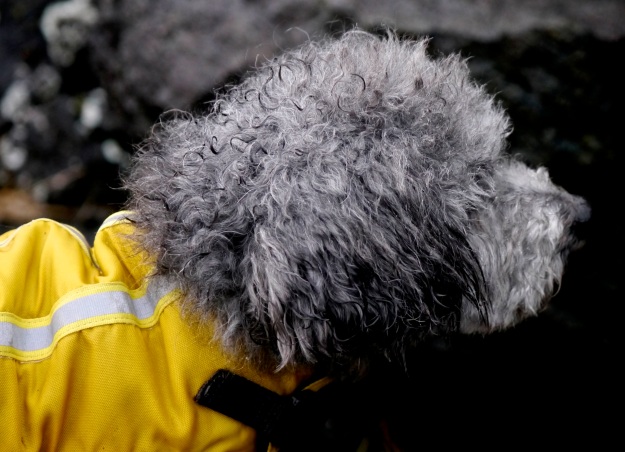 The little dog looks as content with the quiet isolation as I feel. I won’t recognize the driftwood for dead meat until later, when I enlarge photographs of it on the computer. Looking for the best path to the trail, I spot clumps of pale-white globes that hang on leafless branches near the beach brush line. They turn out to be stink currents, one of least desirable local fruits. But they are the brightest things in the forest. 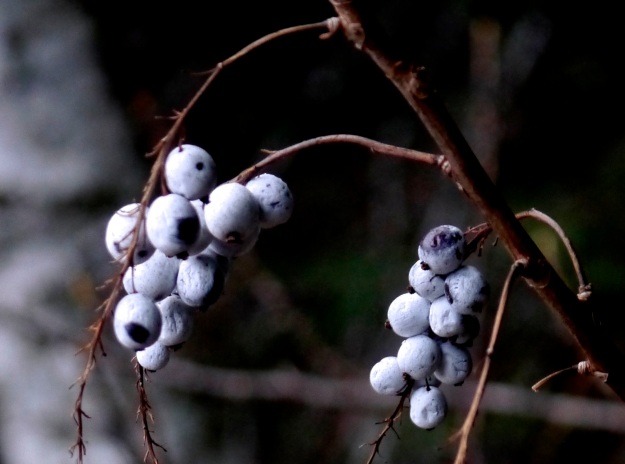 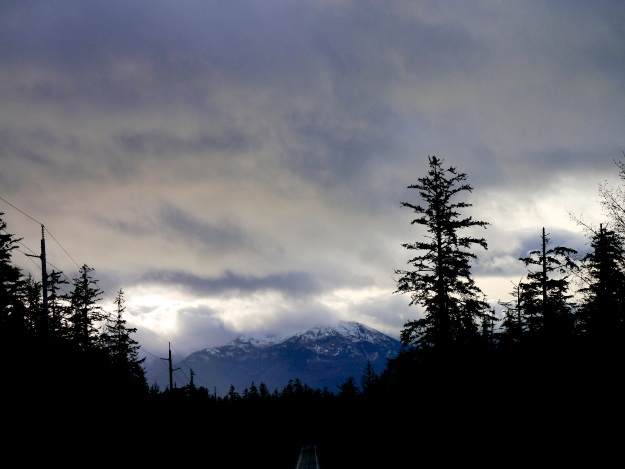 Aki slept through last night’s windstorm. She didn’t react when the neighbor’s trash bin slammed into his house. As I tried to ignore rain hitting the bedroom window like it had been shot form a water house, she stretched and yawned. This morning, during a storm break, the little dog and I head out to North Douglas Island to count the newly downed trees. 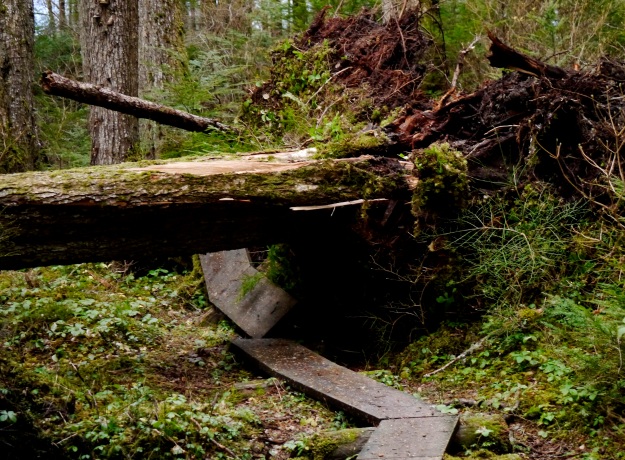 Normally the trees along the Outer Point Trail drip on us during rain breaks. Today they don’t—something I attribute to the wind, which must have blown the branches clean. Shattered limbs of alder sheared off during the storm are scattered on the trail. Near a headland, we find the only new windfall—a hundred-year-old spruce that ripped up part of the boardwalk trail when it toppled. I ask Aki if the tree made any noise when it fell without witnesses last night. She shared no opinion on the matter. But I could see the ripped-up roots and shattered trunk sections—visual evidence of loud sounds made in the night. 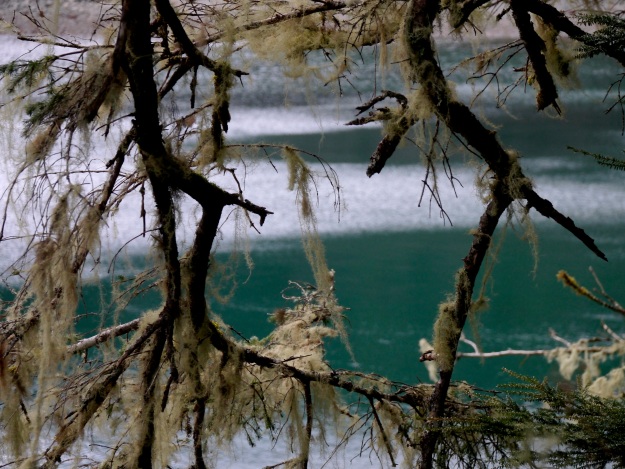