Aki is in a bad mood. It is not clear why. She barks at every vehicle and person she sees on the way up the Gold Creek valley. It can’t be a reaction to the weather. We should be enjoying this dry spell between storms. Yesterday’s storm stripped the leaves from the first cottonwoods to yellow and engorged the creek with fast moving white water. Tomorrow there will be more bad weather. Why can’t the little dog wait until then to share her negativity?

Aki and both freeze and turn in the direction of the noise—a sharp crack that could have only been made by a deer hoof snapping a branch in this soaking wet forest. While waiting for the deer to show herself, I wonder what my little dog is thinking about. She doesn’t show fear or aggression. Most likely sheis just curious. In this way she is more like the seals we jut saw than her master who keeps his finger on his camera’s shutter release.

We surprised one of the seals when it was only 25 feet offshore. It made a noisy crash dive rather than its usual stealthy slip under the surface. In seconds it and another seal surfaced a hundred yards out. While Aki searched through seaweed left by the last high tide, I watched the seals move closer and closer. Sometimes they raised their heads far out of the water. Then, for some reason, they disappeared.

Our deer must have disappeared as well. We give up and move into a section of the forest recently drowned by water backed up by a beaver dam. The base of a brace of two thick spruce trees is covered with sloughed off bark segments. They lay on the ground moss like monochromatic puzzle pieces. Looking up, I see death all the way to the canopy. The beaver’s impulse to build and maintain has damaged this chunk of old growth in the way that man’s impulse to pave and pollute is damaging everyone’s environment. 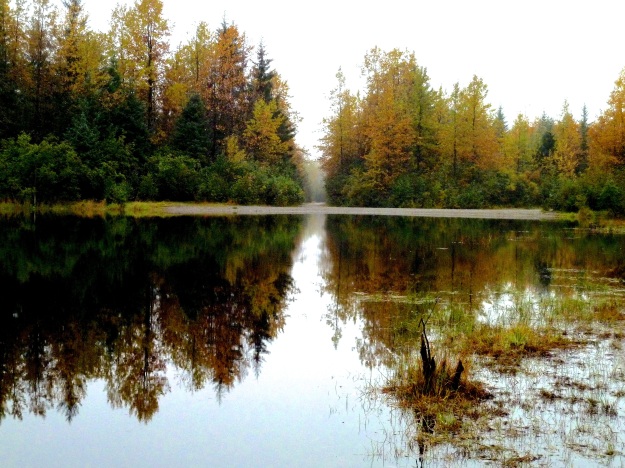 I wish I could talk with Aki about this morning’s light. Somehow, the rays of an invisible sun penetrate a cloud layer thick enough to hide the mountains. When the rays hit Crystal Lake and the yellow-leafed cottonwoods that surround it to give the scene a Mediterranean feel. The little dog and I are wet from rain, not from being overly warm like we might on a summer day near Venice. 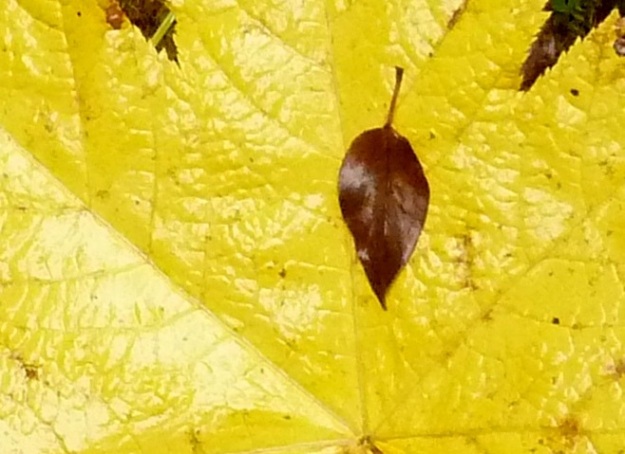 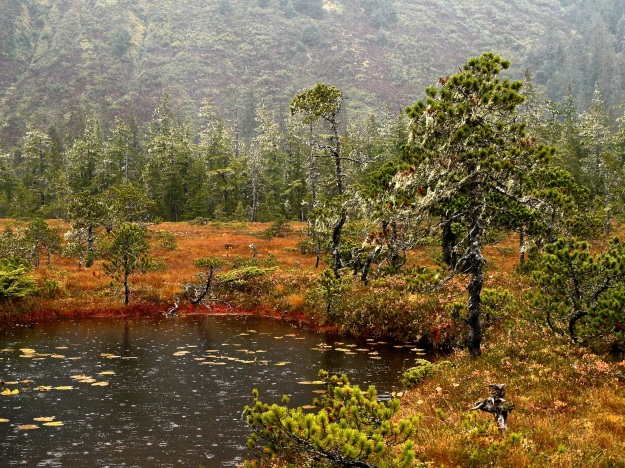 Is Aki finally feeling her age? She will turn nine in November, which puts her on a shady side of middle age. But she is always excited to reach the trailhead and runs two miles to each one I walk. Maybe it’s the weather this morning that has her sending me, “Are you sure you don’t want to go home now” looks. It is cold, wet, and windy on this mountain meadow. My hands are going num. Raindrops cover the filer each time f I point the camera into the wind. If not for the subtle fall color I’d bailed an hour ago. The little dog and I hang in for another half hour and return to the car where she huddles near the door. She leaps inside when I open it, seems to enjoy it when I towel her off. Is this a glimpse into our future? When will it arrive?

In his essay, On Writing, Raymond Carver asserted that, “Writer’s don’t need tricks or gimmicks…at the risk of appearing foolish, a writer sometimes needs to be able to just stand and gape at this or that thing—a sunset or an old shoe—in absolute and simple amazement.” Aki and I are climbing to the top of Gold Street on the way to gape at something in absolute and simple amazement—the southern slope of Mt. Juneau. Near where the street leads onto Basin Road a young woman stares at her smart phone. She smiles and then looks astonished, not at the town spread out below or the yellow cottonwoods that climb above the craftsman houses on Mt. Maria, but at her screen. Down at our library and in Juneau coffee houses, others are yielding to the seduction of personal electronic devices. Rather than talk to each other or admire the fall color, they watch videos, look at selfies, or read Facebook posts. Makes you wonder about the future of the written word. 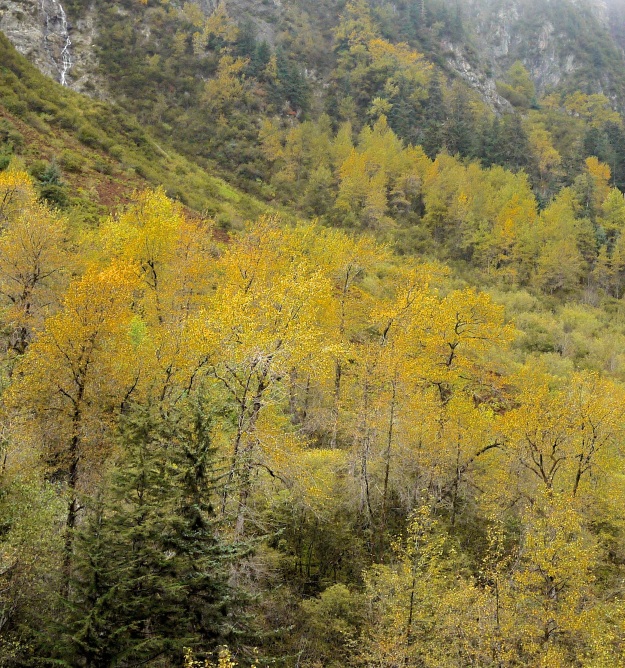 Aki and I walk the shoulder of North Douglas Highway. Earlier a harbor seal pushed it nose and then head out of the water thirty feet away. It starred at Aki like she might be a possible playmate or, more likely, a meal. I snapped a few pictures before it disappeared. So easy.

Now, I’m frustrated. For the third or fourth time, a feeding sea lion breaks the water with a huff, dips down, rises a few more times and disappears before I can take its picture. It repeats these moves over and over again. Each time I hear its huffy release of breath, I try to focus. Just before the time the sensor on this old camera settles on its image, the sea lion is gone.

A belt kingfisher, one of my favorite birds, poses on the root wad of a driftwood spruce tree. It too darts off before the sensor can do it work. Two miles up the road, we turn around just as another sea lion begin barking somewhere on the other side of Smuggler’s Cove. A sparrow sings as a brace of eagles screech at a raven that flies too close to their roosts. Two smallish sea lions swim a parallel course to the little dog and I. They stay on the surface long enough for me to take their picture. As the cloud of frustration lifts and the hauled out sea lion start to groan, I imagine a New York tenement house on a hot summer morning. Through the open windows we hear the groan of a glutton with a distended stomach. His angry wife, in a high eagle-like voice, chews him out for playing the fool. When the groans and screeches subside we hear the bird-like song of the daughter who could have danced all night. On the street, two teenagers ease up the street, hoping to sneak up to their room before their parents can catch them. 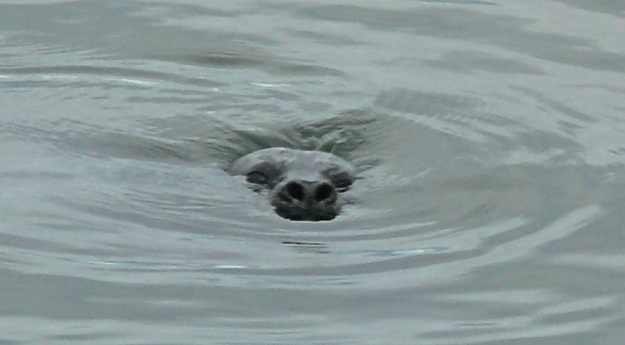 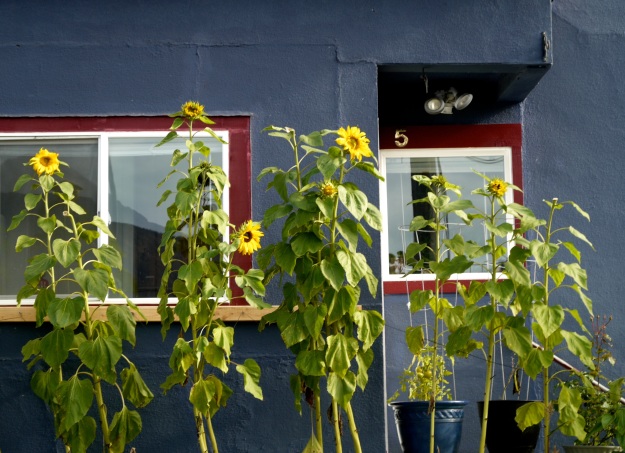 Last night we had rain but the sun is back. It makes our still wet town look fresh. Aki and I take our default downtown stroll. She catalogues and deposits urine as I try to photograph trees showing early fall color. At the bottom of the steep angled Gold Street, near where Gastineau starts its gentle climb across the ruins of the old A.J. Mine, a stand of six foot tall sunflowers appear to guard a small house. They might be a squad left behind by the army sunflowers that have gone to occupy the plains of Spain. But they are here, warning off the autumn gloom, at least until they have a chance to brown and curl after the first hard frost. 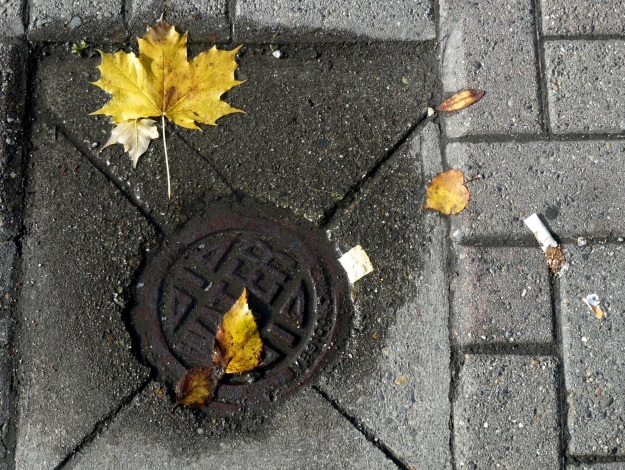 Today, one of the last cruise ships of the season docked in Juneau. Busloads of its passengers have flooded the moraine in front of the Mendenhall Glacier. Drawn by the promise of unexpected, decent weather, Aki and I drive out to join them. Most of the tourists head toward Nugget Falls or Photo Point. The little dog and I divert onto the flat ground recently abandoned by nesting arctic terns. Here I can see that the yellowing willow and cottonwood leaves that at a distance look like candle flames are tired, dying things. Still far away, the glacier looks blue-white and pure. I know that up close you can see the silt that will eventually cloud the waters of Mendenhall Lake darken the uneven ice. 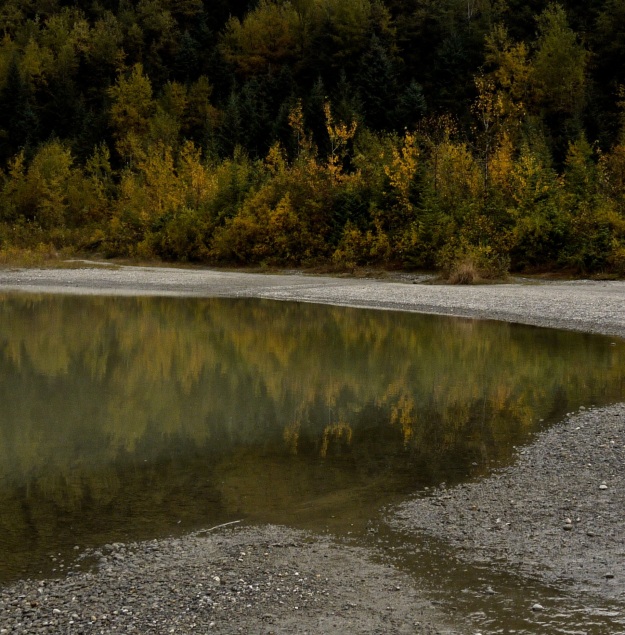 Unburden by local knowledge, the tourists return from Nugget Falls laughing and talking about the big ice river and overpowering waterfall. I look closer at the patterns of yellow and brown on the trailside willow leaves, find a subtle beauty that none of the tourists stop to photograph. The flash of stars that they saw from a distance has blinded them to it.

The rain is back. Aki is excited to be on this broad beach, chasing her orange Frisbee. Her other human and I watch from a picnic shelter as the little dog runs a random route through border grass, splashes across a little stream, and steps on her Frisbee before dashing down the beach. In minutes she circles near to it again before moving onto some unexplored gravel. She is only dog I know with an active fantasy life. Maybe she has too much time on her paws. 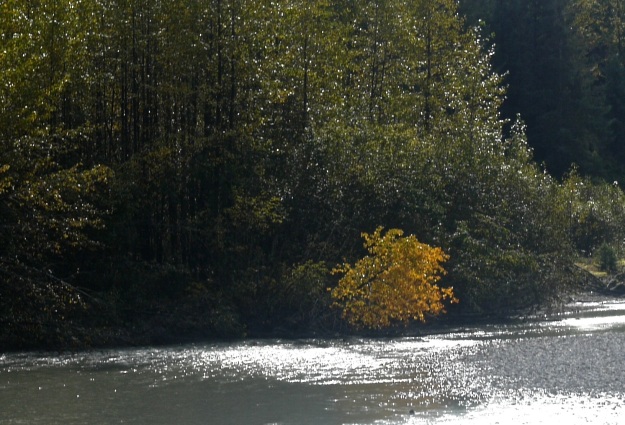 Since May, salmon have passed up Eagle River to spawn in its tributaries; bears have owned its shores, drawn by the fish and later berries; Aki and I have gone elsewhere on our walks. 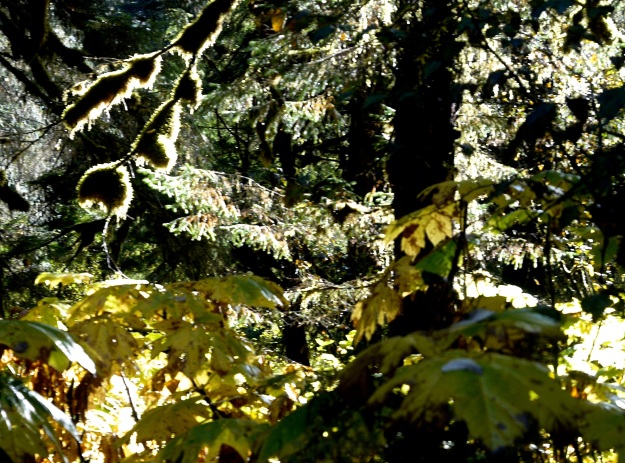 I can’t hold out any longer so this morning we drive out the north road from rainy Juneau to the riverine forest where last night’s cloud cover is already giving way to blue sky and shafts of sunlight. We find no scat on the trail, no half-eaten salmon carcass placed like a warning by a just departed bear. On the tidal meadow, the skins and boney parts of dead silver salmon lay like clothes abandoned by a teenager on his bedroom floor. The eagles, ravens, and other scavengers have left nothing of the bodies to interest a bear.

Aki and I drift into a vague mental space. As sunlight intensifies the modest displays of fall color, the little dog and I become separated. A diminutive herding dog, Aki normally stays close, as if to keep me from wandering into trouble. This morning, I have to whistle and call until she appears high up a grass-covered hill. She searches around from me in jerky motions and then dashes down at her top speed. I can’t blame her for getting lost on this familiar ground. Wasn’t I lost in peace and the yellow leaves when the sun hit my face for the first time in more than a week?