The sun almost blinded me as we drove across the Douglas Island Bridge. It illuminated Sandy Beach to our right. To our left it highlighted a line of fog that reached out across Fritz Cove. I turned right, not left, when we reached the bridge’s roundabout. Then the sun disappeared behind a cloudbank. We were in for a world of gray.

Dogs are reported to be colorblind. Maybe that is why Aki shows the same enthusiasm for a dark forest trail as she does for one flooded in light. I’m too occupied with not slipping on the icy trail boards to check for forest for action. But the little dog has an updated catalogue of smells by the time we reach the beach. 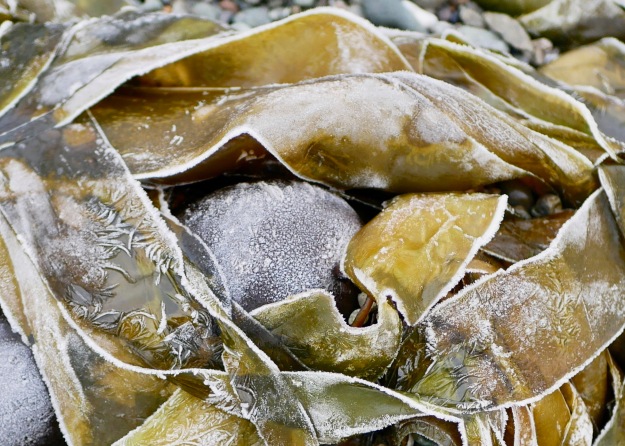 Last night the sand froze and frost formed on the beach pebbles. For once, it was easier to walk on the sand. Storm tides had ripped bull kelp from their anchors and dumped them on the beach along with jellyfish, and rock weed. Frost forms on the edges of the seaweeds. Freezing temperatures turned the once smooth surface of a jellyfish into one covered in leaf skeletons.