Aki squealed and squeaked at the back door as I pulled on my boots. She just managed to stay still as I fastened on her harness. I had returned home this morning on the Alaska Marine Highway ferry Malispina after a canoe trip to Prince of Wales Island. She spent the time of my absence at a good dog boarder. But I could tell by her actions that she needed a long walk in the woods. 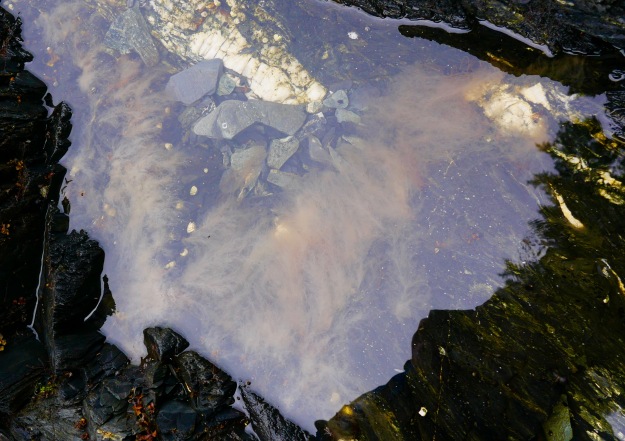 Aki had calmed down a bit by the time we reached the False Outer Point trailhead. At that point the little dog’s attitude was most compelling thing about the day. Gray clouds blocked the sun and dulled the colors of Fritz Cove. Neither of us cared.

Racing the incoming tide, we managed to round the point and three more headlands on moist rocks. On one columbines attracted hummingbirds with their bright-red flowers. Overhead an eagle flew a patrol. Even it’s cries failed to dampen Aki’s spirits. The sun came out by the time we left the beach for woods and circled back to the car.

In Fritz Cover a single humpback whale fed close to the road. Aki and I watched it’s back crash above the surface and heard the whoosh of spent air being forced through the whale’s blowhole. It made three shallow dives and then threw up its flukes in a dive. The small amount of barnacles on its tail identified it as a young whale.