One of Aki’s human friends paddles from the front seat of my Holy Cow Canoe. I’m in the back, steering the canoe in what I hope is the direction of the Sarkar Lake cabin. The lake, itself on an island of old growth forest in a sea of recovering clearcuts on Prince of Wales Island, is dotted with tree-covered islands. Aki would have liked the ride but not the day-and-a-half long ferry voyage we took to reach the island. She is snug back home.

The boat it full of gear and an ice chest of food but we carry no tent. We have been exploring and wandering on the lake for several hours but haven’t found the cabin. I’m starting to wish we had brought the tent.

Before the government subsidized large scale logging in Southeast Alaska, Prince of Wales Island was covered with old growth cedar, spruce, and hemlock trees. By sinking their roots into the limestone karst of the island, many of the trees had grown massive. It was land of big trees, salmon, and over six hundred caves before we outsiders joined the Tlingit and Haida people on the island. In the Sixties the clearcutting began. 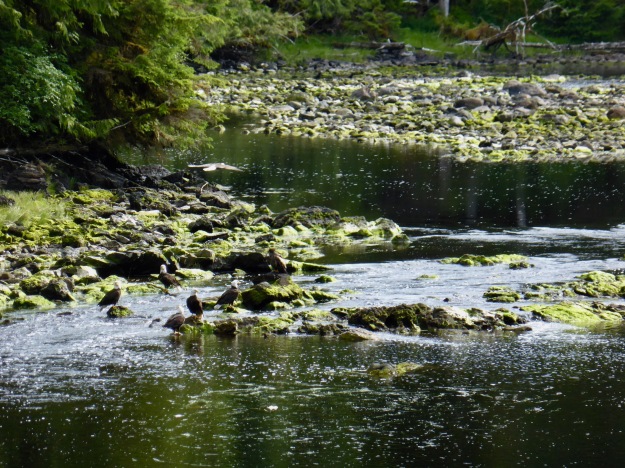 I last paddled Sakar Lake thirty years ago when many of the clearcuts were still raw slash and Coffman Cove was a company town. Now nature is healing the wounds. Sockeye salmon climb up rapids to spawn in the lake’s inlet streams. Eagles gather near the rapids to wait for the dying to begin.

To stop worrying about finding the cabin, I ponder of the power of nature to heal human inflicted wounds and remember the twenty or thirty deer, many with new fawns, that we passed to the get to the lake from the ferry terminal. All will work out, I tell myself just as the nose of the canoe rounds a point hiding the cabin.