Gusts of wind rush through the Treadwell mining ruins, stripping yellow-brown leaves from the cottonwoods. Most of the leaves twirl to the ground. But some collect on the lower limbs of spruce trees. A small group has formed a nest in a mossy snag. When she was a pup, Aki chased and snapped at twirling cottonwood leaves. Today, she ignores them and concentrates on the important nose business. 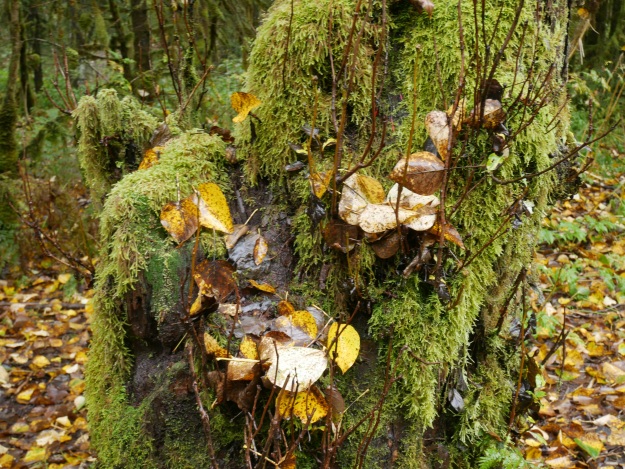 On the beach someone has assembled a small group of cairns. They stand like opinionated elders on the beach above the bay formed by the collapse of a mine tunnel. I squat behind them to discover what they are eye balling. All I can see is a grove of cottonwoods being stripped by the wind, lines of busted wharf pilings, and a new squall moving up Gastineau Channel. Maybe the cairns were assembled two days ago, when strong sunlight would have enriched the cottonwood leaves with color, when a blue sky would have provided the leaves a background against which to shine.