Today I discover what its like being used by seals. Aki and I are walking along the lower Mendenhall River under full sun. Ducks and geese hug the waters on the river’s other shore. It’s hard to see them through light glittering off the river. A Great Blue Heron croaks then rises from the shallows to fly closer to Douglas Island. Then a Belted Kingfisher flutter flys over the river, its wet feathers glistening in the sun.

A seal surfaces nearby and follows us down river. Figuring he is just bored, I concentrate on tracks in the sand. In this area  transitioning from the world of water to that of land, every rock and half buried stick supports islands of shell fish. Small tufts of beach grass colonize high spots that might stay dry during moderate tides.  Green shoots mix with season’s dead stuff to promise spring. Aki’s tracks join those of a gulls and another canine. Normally she would show more interest in the larger dog like tracks, sniffing carefully where the animal leaped then pounced on something. The gait and track pattern suggest a wolf but I can’t believe one would expose himself on this well used portion of ground. Aki also ignores a snail moving deliberately across a patch of smooth sand. It leaves behind a long furrow as it makes for a tiny island of mussels. 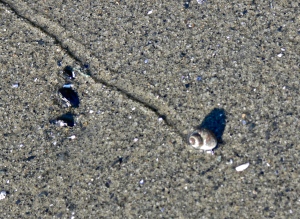 Reaching the turn around point we spot a small raft of ducks right up against the beach. One cackles a warning and they move into deeper water then head up river. I’ve forgotten friend seal so am confused when the ducks zigzag their way up the current. After reaching midstream they paddle quickly back to shore. Even though we are never closer then 75 feet to the water, the ducks move back into midstream when we they hear my boots crunch on beach rocks.

Things become clear then the seal surfaces to encourage their return to shore. At this point I stop walking and watch the ducks swim to midstream not far from where the seal floats. They spit up. Most head across to the other shore but one, singing out a song you would call sarcastic if it came from my mouth, turns upriver. Perhaps knowing that the one brave duck will fly at the first charge, friend seal doesn’t follow.  Just when the duck seems clear, another seal bursts out the water and grabs it. The two seals tussle on the surface then disappear. The nervous muttering of the onshore ducks stops and we all spend a moment in silence reflecting on what just happened.

Aki and I turn into the sun and head toward the car. Rounding a headland we see the  Glacier reflected in the incoming tide, two geese flying across its face. One of the remaining ducks begin the sarcastic song as we disappear from sight.