It’s the last day of writer’s school. Rain started last night and has washed clean the bike path. It must have also discouraged other users as I only pass homeless people on my ride to Russian Jack Park. One man sleeps on a trailside bench as rain drenches his thick, black hair and beads up on his tourist-grade rain gear. Another stands just off the trail as if waiting for a bus that will never come. 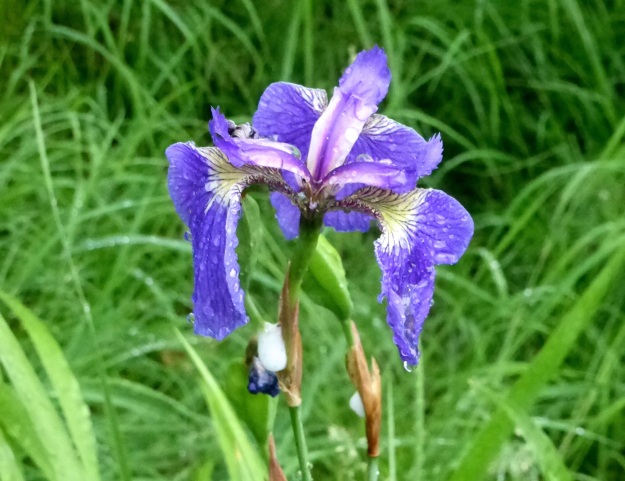 There will no animal drama on this ride. No moose or bear will break across the path. No bird song will rise above the white noise of commuter traffic. I will hear the too-sad minor song of an Alaska Railroad engine warning of its approach. I’ll watch water dimple Goose Lake and speed up the demise of purple and blue iris flowers that brightened the trail during my last ride in the sun. I’ve enjoyed being part of writer’s school, a village that forms each summer near the confluence of Campbell and Chester Creeks. But, it will be good to be back home in Juneau—a town that knows how to look its best in the rain. 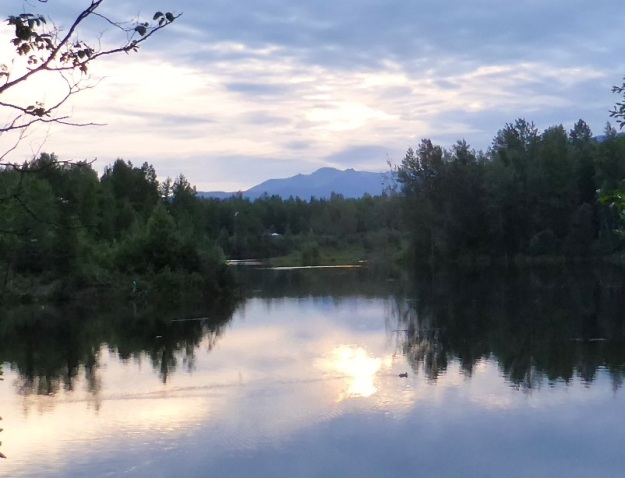 Pearly-gray has replaced blue as the prominent color in Anchorage skies today. I ride away from the Inlet toward the Campbell Creek trail system, vowing to keep away from the salmon spawning stream because it draws brown bears this time of year. At first I ride against the flow of morning commuter traffic on Elmore and then swing into the woods. A single-track trail allows me to meander among white-trunked paper birch that might be hiding moose. If they do, none of the big, horse-like guys show themselves. 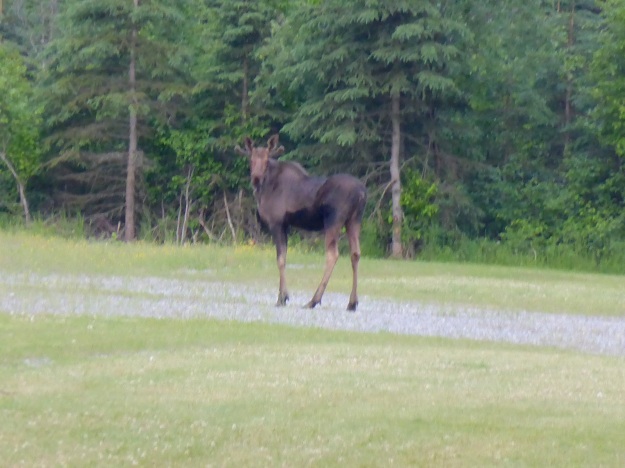 I take another trail that offers more open views and spot, a half-a-mile ahead, something that looks like a wobbly billboard. As I approach it resolves itself into a young male moose with tiny antlers covered in velvet. When I stop, he stares for a second and walks elegantly toward the woods. I will have to pass him if I continue down the trail. I’ll see how it goes. Remounting, I ride closer, which causes him to freeze again. I remember my dad’s warning amount never approaching a deer or elk while they are in velvet and stop again. The moose resumes his walk toward the woods. When he reaches the forest edge, leaving a good chunk of land between him and the trail, I restart my ride. 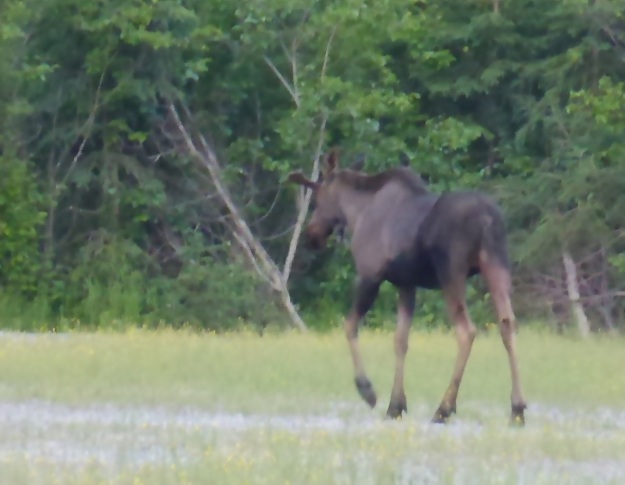 Wow, my first moose of the year. I didn’t see any during last summer’ writer’s school residency.

The trail brings me back to Elmore where I watch a late-model Corvette speed by before crossing over to the bike lane. I briefly ponder whether a moose or sports car would cause me the most damage and am thankful to the government that funded this ride-alone bike path. 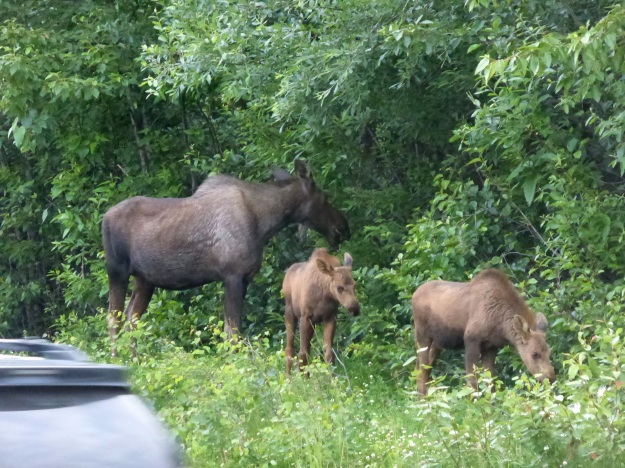 A mile down Elmore, a cow moose and two calves feed next to the road. Workers listening to talk radio or silently planning a pattern of attack at work wiz by the family scene. Honey, stop gorging yourself and look after your babies, I think. While the mom turns her butt to the road, her two calves dance along the verge. The aggressive one bucks like a bareback bronc and drives its sibling away from food and mom. In running away, shy one almost enters the rushing traffic stream. I’m close enough to see the startled look in the shy moose’s eyes when it freezes just before it would have been crushed by a northbound SUV. Unable to watch any more, I ride back to campus.

The sun returned to Anchorage yesterday afternoon. Last night, as it softened towards sunset, low angled light transformed the normally nondescript Chugiak Mountains into Swiss Alps. The drama continues this morning as I ride from the university past University Lake. With no wind to whiff it, the lake forms a polished mirror for the rising sun.

When the sun breaks open a blue-sky day like this one, Alaskans tend to turn their faces to the light. Some have to resist using overblown adjectives to describe the resulting beauty. The bike path keeps me in wood shade during most of the ride toward Cook Inlet but, I am able to turn my face to the sun at the spot where Fish Creek flows under the Coastal Trail. Then, I scan the wetlands for the Sandhill Cranes that fed on these flats every day of last summer’s writing school. But only gulls cruise for food. Out on Cook Inlet, a powerful tug pulls a loaded barge to the Gulf of Alaska. It might be heading for the Bering Sea to deliver fishing skiffs, trucks, can goods or house building materials to Unalaska or Nome. I remember watching similar, if smaller barges slowly moving up the Kuskokwim River, wondering what lucky guy was getting the Hewescraft boat perched on top of a stack of orange or yellow freight containers. Maybe this Cook Inlet barge will deliver happiness to someone on St. Lawrence Island or Dillingham. 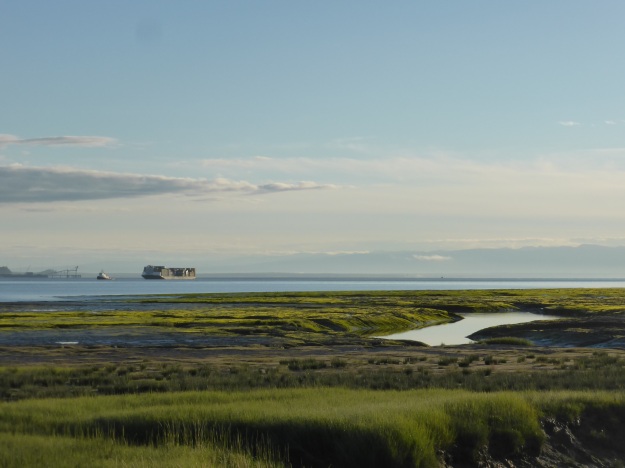