I’m on our highest ladder knocking the last golden delicious apples from our tree. Otherwise a bear will break the tree trying to climb up to get them. Last night Aki chased away one before it could climb after the apples. Even though it outweighs the little dog by a factor of 15 or 20 I felt sorry for the bear. It can’t enjoy having its sensitive hearing assaulted by poodle yapping. I don’t.

This morning, while the sun burned night fog from the surface of Gastineau Channel, Aki and I drove into the mountains. After yesterday’s long boat ride to the lighthouse, we both needed to stretch our legs on the climb to Hilda Meadows.  I expected no animal drama. Wolves and bears roam the mountains but in such small numbers there was little chance of an encounter.

There was drama from surprising sources—spiders. Every September our spiders release their children into the world. They young climb stalks of grass and fly off on glistening strands of spider silk. Many spiders must have landed in the meadows. 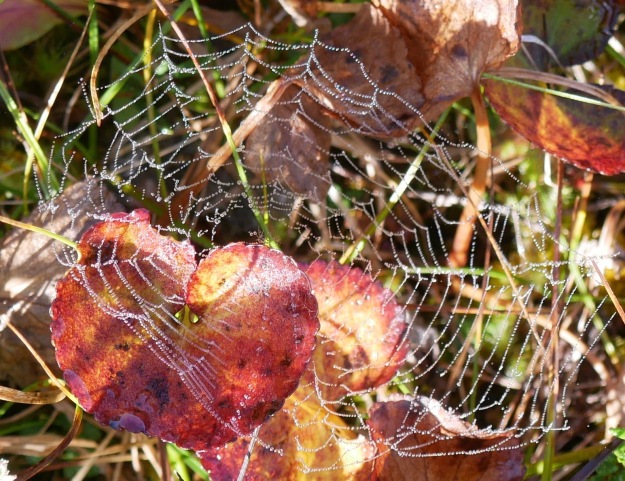 Spiders had already constructed angular webs between grass stalks and over miner’s cabbage red with fall cover. Some even suspended their silk nets between the banks of narrow watercourses. 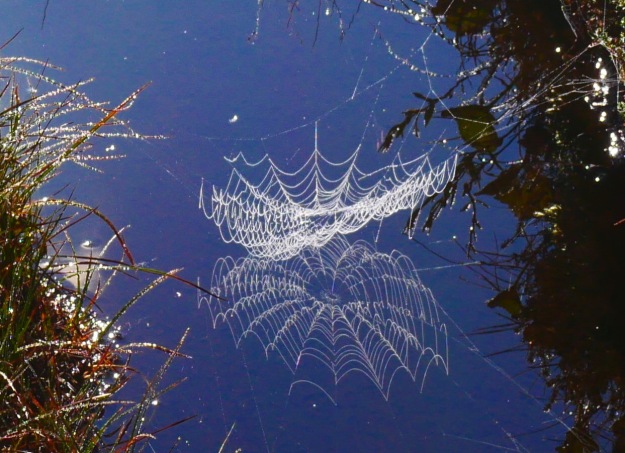 Aki, who doesn’t care about spider webs or even fall color, surveyed the meadow for danger while I chased after webs. I wanted to tell the little dog to relax.  This time of year the meadow bears must be down in the Fish Creek drainage getting fat on incoming salmon. Then she led me across a patch of shooting stars flattened recently by a sleeping bear.