Aki goes on alert—head up, front feet planted in the sand, tail straight as a mast—and stares at the fluttering wing of a bull kelp strand that had been snagged on a splintered piling. I could tell her that the long strip of stranded seaweed poses no threat. But until she has made her brave charge at the perceived enemy, she won’t believe me. 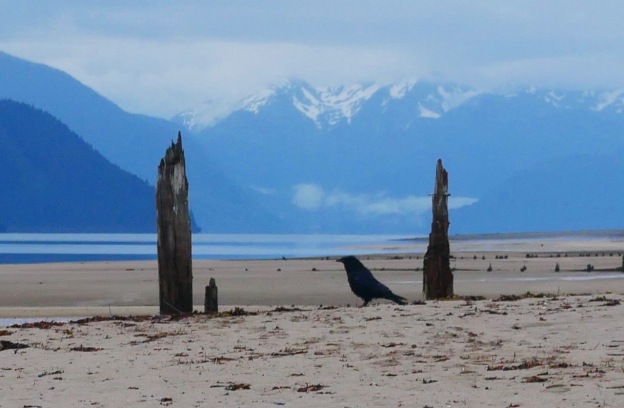 Up Sandy Beach, a raven cocks its head in wonder or dismay as it watches my little poodle mix act out a scene from Don Quixote. A bitter sounding bald eagle, perched in a beachside spruce might be offering its own commentary on Aki’s actions.

After the raven flies from beach sand to the top of its own piling, we push on toward the small but deep bay formed when one of the Treadwell mines collapsed. A recent high tide has stripped away the sand covering the body of an old pickup truck. It could have been abandoned after the tunnel collapse in 1916. It might have been buried and then revealed by tidal action many, many times. But I’ve never seen it before. The bed box of the pickup contains a rusted tool and shards of a heavy ceramic bowl that might have held oatmeal eaten by one of the miners on the morning of the tunnel collapse. I could slip one of the shards out of the box and into my pocket. Would that be a relic rescue or interference with nature’s efforts to cleanse?

1 thought on “Revealed by the Tide”