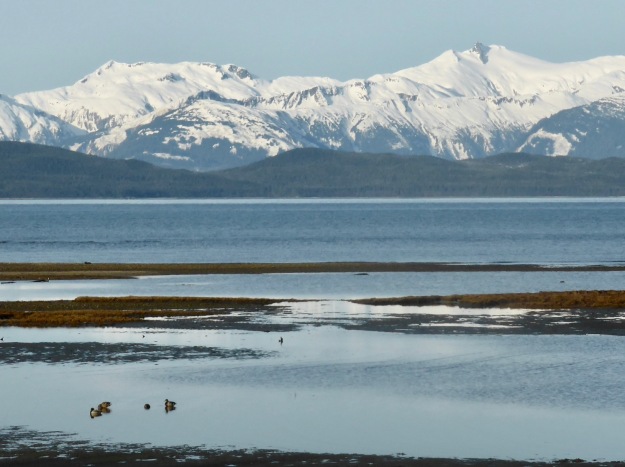 The writer’s retreat at the Shrine ends this morning. I’ll be back home with Aki soon. But first I must try to see the whale. While I was looking at geese along the Eagle River, one of the other writers on this beach was startled by a surfacing killer whale. First she heard the whale’s exhale, a burst of water forced at high pressure through the orca’s blowhole.  She turned in time to see the whale’s black dorsal fin glisten in the sun and then disappear beneath the waters of Lynn Canal.

I am walking the same stretch of beach where my friend saw the whale. Earlier this morning on this beach I watched two juvenile Stellar sea lions porpoise through the water, flushing three golden eye ducks to flight. There are no sea lions now and I wonder if the whale ate one of them. Last night I stood here and watched the sun set behind the Chilkat Mountains. But now, I see only a clutch of mallards fishing offshore.

I tell myself that the important thing is that the whale was here, not whether or not I see it. Then I remember the other times I’ve seen killer whales. There were the times pods swam by as I paddled a kayak off of Marmion or Portland Islands. Off of Marmion an adult female orca swam to within 10 meters. Another time Aki and I watched a pod of them chasing king salmon just north of here. It doesn’t resolve my desire for another whale sighting. But it justifies my belief that if not today, then sometimes in the future, there will be more whales.