Red sky in morning, sailors take warning. Look at that sunrise, little dog. Know any sailors we should warn? Aki gives me her “don’t mess with me” stare and curls back up into a comfortable sleeping position. Down channel the water glows with an angry glare. I sip coffee and watch the fierce light fade to grey as clouds descend to block the sun. 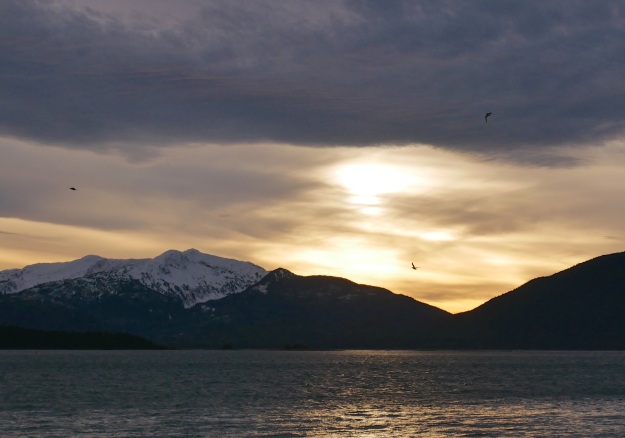 Hours later and we are walking the beach in front of the old Auk village. Even through it is just past noon, the sky is already yellowing like it does at sunset. A long strip of light reaches across Favorite Channel from the Chilkat Mountains to our feet. A rising wind raises small waves that slap the beach. As if the light could provide them heat, a small raft of harlequin ducks paddles into the thin strip of sunlight.

We walk out to Pt. Louisa, the site of at least one killing shipwreck and watch a fishing boat move without difficulty towards the Auk Bay harbor. So much for the “red sky at morning” warning. 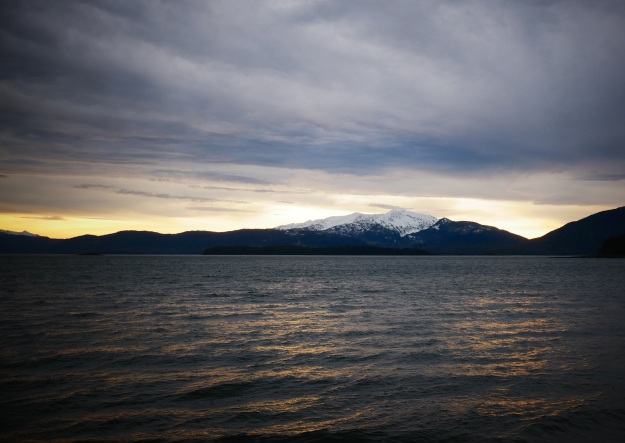 I wonder if the boat carries home red king crab. Harvest of the once abundant crustaceans has been banned until this winter due to a population drop. But Fish and Game just opened up a season for them. Now fishermen who pulled their boats at the end of September’s silver salmon season are rethinking that decision. They ask around in bars or the vegetable section at Foodland if anyone has a boat they can use to go after crab on days when the sun doesn’t color the morning clouds red and the Taku winds don’t send water sprits dancing across Gastineau Channel.

2 thoughts on “Red Sky At Morning”