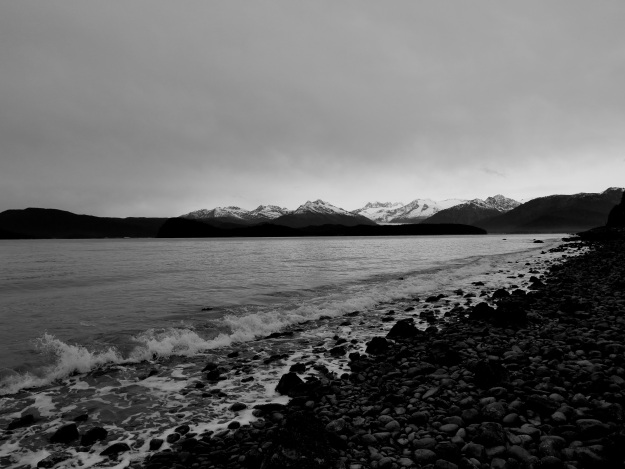 Aki, I may be suffering from sunshine withdrawals. The little dog and I are on the false outer point beach. She has waited patiently as I collected severed seaweed for the garden. Now we both look out over Fritz Cove. It’s a gray scene: gray beach, ocean, mountains, glacier and sky. Even the spruce and hemlocks on Sphun Island look grayer than green. One gray gull is the only thing beside waves animating the scene.

Work done, we enter the dim woods. Yesterday afternoon’s sunlight would have brought out the colors in the forest floor moss and the scattering of leaves not yet brown. But today, even the frost refuses to sparkle.

Aki is having a great time sniffing for sign and leaving post cards of scent for her dog friends. But I am in bit of a funk until we reach a half-drained pond. Apparently not ready to surrender to winter, green skunk cabbage shoots poke up through the pond’s surface to be gripped by a sheet of newly formed ice. Busted, I think, even as I admire the doomed plants’ spunk.