Perhaps because we just celebrated souls and saints—the days of the dead—the snarled pine snag has become a dancing spirit. Looking closer, I realize that it’s a trick of cold—the way that frost settled around the parallel, eye-socket-shaped injuries to a pine burl—that creates the illusion. But the apparition reminds me to honor my dead.

Like most Alaskan immigrants, my people are buried in hometown graveyards far away. I can not spend the first days of November tending their graves. But their spirit-like memories are quick to answer when beckoned.

If Aki remembers her dead, she does not say. Impatient with a human who stares too long at a frosted snag, the little dog starts off toward the beach. I follow and find two long rows of the orange and brown sea growth that we call rockweed. During the last storm tide, waves ripped the weed from anchoring stones and rocked it back and forth, like a baker needing dough, until the long, dense lines were formed. 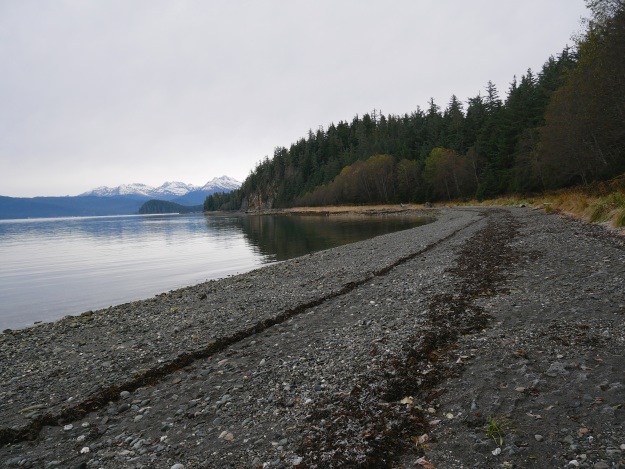 I could dig into the rockweed rows and find eagle feathers, beaver-cleaned sticks, and opalescent shells. But a harbor seal just offshore grabs my attention by flipping a just-captured fish into the air and biting it in half. One death to sustain the life of another.

1 thought on “The Days of The Dead”