For the first time in a month, the false outer point parking lot is almost empty. We pull in near the only other car and spot its owner fishing for king salmon on the point. Two crows stand on either side of the fisherman, waiting for him to clean a fish. Between the fisherman and us, an immature bald eagle stands erect on a rock near the tide line, surrounded by a small murder of crows. Duffer, not a scientist, I imagine the eagle is preaching or teaching to the crows. But they are more likely the bigger bird’s guards. 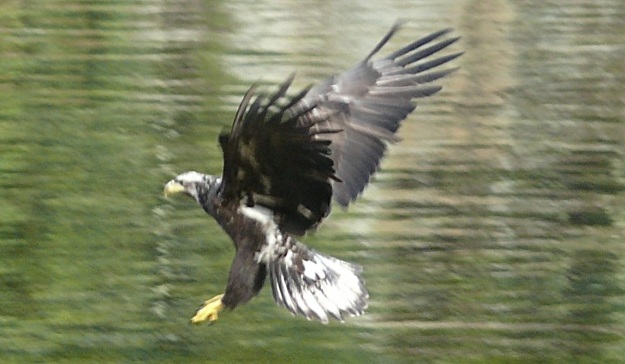 The crows scatter when Aki walks onto the beach but the eagle stays. I wonder if it is waiting for the tide to ebb enough to reveal something to eat. When several of the crows fly low passes over the eagle, it flies a few yards down the beach. After this happens several times, I realize that the eagle just wants some peace. Our presence and its effect on his tormentors is giving him a little.

It’s worst for the eagles perched in the spruce trees above the point. Squawking crows take turns diving on them. Some eagles hold their ground or try to place spruce boughs with their sharp-tipped needles between themselves and the little corvids. The crows drive off two who fly around the point to a crow free zone where they bicker over a perch that offers a good view of the expanding tide lands. When the sounds of crow and eagle complaints die away, I can hear sea lions grumbling. They are all waiting for the ebbing tide—eagles, crows and sea lions—as unhappy as commuters waiting for an overdue bus. 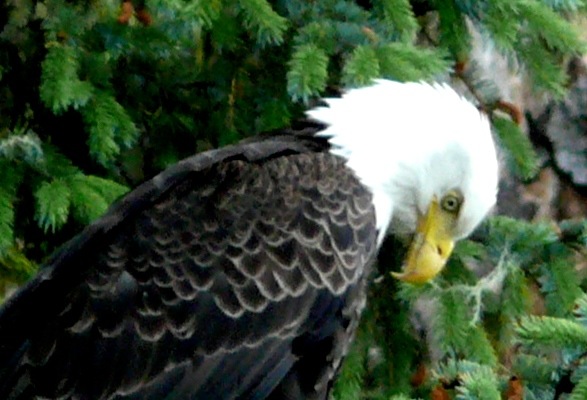