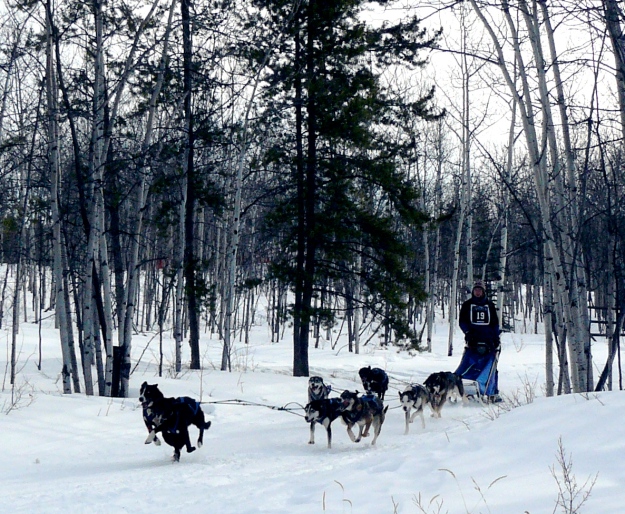 This morning we heard the frantic sound of 10 or 12 dog teams being readied for a race.  It has been many years since we last hitched up dogs to a sled but the sights and sounds then and now are much the same—crazy canine eyes offering no recognition of anyone but their musher, high pitched yelps—some in silo—others in harmony, the springing leap ending in a lunge of frustration.

The first and perhaps strongest team approaches the starting line, here a path between aspens; musher crushing the sled brake into snow while handlers spaced evenly among the team struggle to control the dogs.  While the next team approaches the staging area, a race official releases the dogs with a nod of head.  The second team must watch, constrained by men for two minutes, haunted by memories of the just released disappearing around a bend.  When we ran dogs this was the magic moment— the released dogs powering forward, almost snapping the sled from your hands. So intent are you in controlling the sled you don’t notice for a second silent replacing pandemonium.

1 thought on “The First Dogs on the Trail”