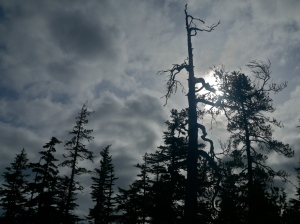 Without a working car this weekend we again start and end our walk from Chicken Ridge.  It means keeping Aki on a leash for the drop down Goldbelt Street with it’s gold baron mansions and then through streets lined with Craftsman houses that lead to the Douglas Bridge. We cross over Gold Creek, here contained by a concrete trench and past the giant willow on 10th Street, now orange-yellow with rising sap.

Aki manages three bowel movements between the house and the bridge. forcing me to pick up the product of each with large leaves and carry it to the nearest trash can. Since the cans are few and far between I carry her waste for blocks, passing friends and a legislator and his wife. They all smile and act as if I am not carrying  a smelly leaf wrapped bundle in my right hand. 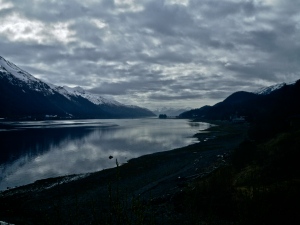 The sky clouds up as we begin the climb up the Douglas Bridge. I photograph the mottled sky reflected in a spot of calm channel water while Aki cringes at each passing car. We move quickly on to Douglas Island and start climbing through the Cordova Hill neighbor to the Dan Moller trail head.  This is crow country and one of the black birds shadows our ascent. “Is this Cubby,” I mutter to myself for he acts like he knows me.

Cubby was the runt of a brood of crows that hatched in our spruce tree. That was before the crows abandoned Chicken Ridge to the ravens.  He only survived through the kindness of a sibling who would bring him food after they fledged. A weak flyer, Cubby could just manage to reach a suspended telephone cable that ran in front of our house.  Once there he would call for help until one of his nest mates landed to transfer food from her beak to his.

The following summer Cubby returned, now sleek and strong to raise his own brood in our tree. On sunny mornings he would take up station on our porch railing and peer in the window while I practiced guitar. The crows left that year and never returned. Perhaps they moved to this wide suburban street with its large new houses and mowed lawns. The crow that could be Cubby escorts us to the trail head and is there where we return to his street for the trip back to Chicken Ridge. 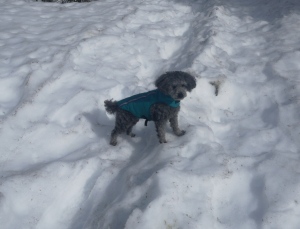 The Dan Moller Trail starts at a small parking lot that separates two fancy modern houses. It makes a modest angled climb up a wooded slope and then cuts across a series of muskeg meadows.  After that it forms a series of switch backs that carry you to the Treadwell Ditch.  Today we hit deep soft snow before the first meadow. I am breaking through with every step, sometimes up to my crotch. Even Aki makes deep impressions with her diminutive paws. 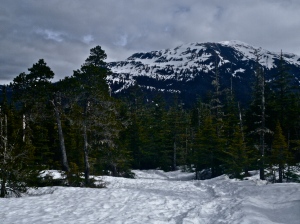 Fighting on we reach the first meadow and hear the chimes of a carillon in Downtown Juneau announcing the tenth hour of the day.