This Whitehorse ski area is an intersect area where man and wild things coexist. Men move most freely in daylight but the abundance of animal tracks show that they own the night. I choose the smaller, less used tracks that meander through a mixed forest of hard and soft woods. White spruce, some showing the red bark of mature trees space themselves between well formed alders. Yesterday’s overcast skies remain but let though enough sunlight to cast shadows on the snow.

Deep in the woods I watch a squirrel wait by the side of the trail like a homeless person timing the crossing of  an expressway. Forming a question mark with its tail, it tenses then springs across the ski tracks to the safety of the bordering trees. Minutes later I reach a disturbed meadow where large standing spruce, needless and black, dominates the surrounding willows. A small bird of prey flies from the top of a spruce with a quick flutter, then a glide, and another flutter. I’m surprised to see that the willows have already formed fuzzy catkins which are dropping seeds. 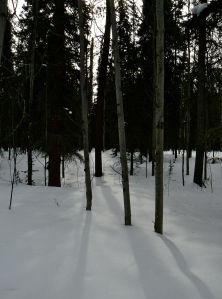 Back in the heavy woods a raven waits by the side of the trail until I stop. Then he waddles into the middle  of it and nests down next to the ski tracks.  He knows I am coming for I am the train. The train stops and reverses, leaving the bird stranded at the station. 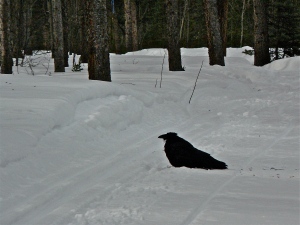 Someone has hung an eagle feather at the junction of two trails. It dangles by an almost invisible thread, a tired thing of cinnamon white and brown. The eagle discarded it. Man hung it here where no decoration is needed.