Fresh snow this morning followed by sunshine drives us to the open spaces of the wetlands. Three or four inches of new snow almost covers everything, Enough straw colored grass and mud show through to provide an interesting contrast. A few weeks ago we tried to reach Gasteneau Channel from here only to be blocked by Duck Creek. Today I hope to cross the creek where it is still narrow.

Nothing has passed over this land since the last snow though we do spot the gull tracks in a tiny mud bar. Brightly colored plastic objects — buckets and bottles mostly, poke out from under the snow. I count myself lucky that I haven’t seen such flotsam on other parts of the wetlands.

The weather changes as we reach Duck Creek, which unfortunately is still impassible without rubber boots. An east wind rises, pushing clouds down channel to close over the diminishing blue sky. Aki takes shelter in my lee but I am exposed on this flat white plane. Ducks complain on the far side of the creek then take flight for more remote country. In minutes we received a replacement flight of Canada Geese fleeing from the direction that drew the ducks. Some form the traditional “V” shape while the rest fly as an organized gang. 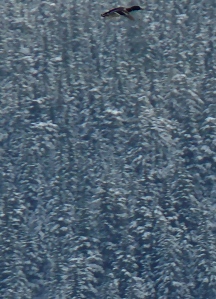 On our retreat to the car we cross through a large patch of Fireweed plants that presented a brilliant magenta show late last summer. The dead stalks bent almost to the snowy ground by weather  offer a sad beauty. As a cold wind rises and snow begins to fall I join the stalks, as pathetic as the remnants of  Napoleon’s army retreating from Moscow, shouldering into the wind and make for the comfort of the car.